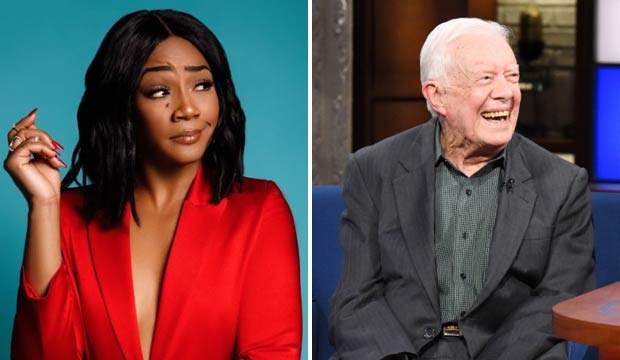 Tiffany Haddish may not have gotten an Oscar nomination for her breakthrough role in “Girls Trip” (2017), but by February she could still be halfway to EGOT. She won an Emmy a few months ago for guest-hosting “Saturday Night Live,” and now she’s up for a Grammy. All she has to do is beat an ex-president.

Haddish is nominated for Best Spoken Word Album for “The Last Black Unicorn,” the audiobook version of her collection of personal essays. This is her first Grammy nomination, but she has been in a Hollywood honeymoon period since her “Girls Trip” breakthrough with a half dozen film and TV roles in just the last year. She also hosted the 2018 MTV Movie and TV Awards. She even appeared in the music videos for two Grammy-nominated songs: Drake‘s “Nice for What” and Maroon 5‘s “Girls Like You.”

Though there is a separate Grammy category for Best Comedy Album, comedians also do pretty well in the Spoken Word race. Recent winners include Jon Stewart (“Earth: The Audiobook,” 2011), Stephen Colbert (“America Again,” 2014), Joan Rivers (“Diary of a Mad Diva,” 2015) and Carol Burnett (“In Such Good Company,” 2017). In fact, Haddish is probably better off in the Spoken Word category since Comedy Album is so drastically biased against women.

But she’ll still have to get past Jimmy Carter. America’s 39th president is nominated for “Faith: A Journey for All,” in which he reflects on his own faith and how we may also be sustained by it. Carter is actually a longtime Grammy darling with nine nominations stretching back more than 20 years. And he has won more Grammys than presidential elections: he prevailed for “Our Endangered Valued” (2007) and “A Full Life” (2016). But Carter isn’t the only politician who has won. Jesse Jackson, Hillary Clinton, Bill Clinton, Barack Obama and Al Franken have claimed this award too.

Rounding out the category are Courtney B. Vance for performing Neil deGrasse Tyson and Avis Lang‘s “Accessory to War,” David Sedaris for “Calypso” and musician Questlove for “Creative Quest.” Questlove is already a five-time Grammy winner for his work with the band The Roots. Vance and Sedaris are first-time contenders; Vance already has a Tony and an Emmy, so a victory here would put him just an Oscar away from his own EGOT grand slam. Can any of them stop the former POTUS from three-peating?