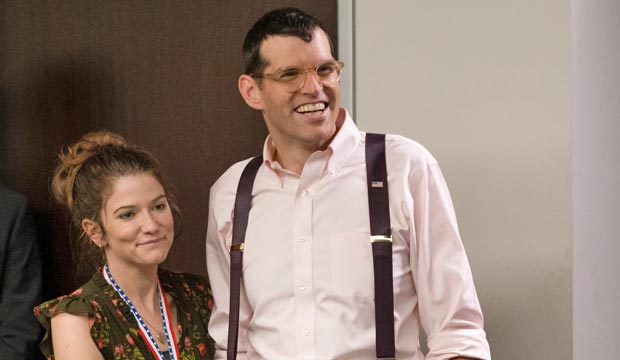 “Veep” ended its seven-season run on May 12 with (SPOILER ALERT) Selina Meyer (Julia Louis-Dreyfus) in the Oval Office and Jonah Ryan (Timothy Simons) as her VP. So with Jonah assuming the show’s title role, can his portrayer finally earn his first Emmy nomination for the series? A few of our Experts and Top Users think so.

Louis-Dreyfus has been embraced by the Emmys from the very beginning; she has never lost Best Comedy Actress in the six years she was nominated for “Veep.” But the show’s supporting cast was slower to catch on with the television academy. Tony Hale was the first Best Comedy Supporting Actor contender for the series, earning five straight bids (2013-2017) and winning twice (2013, 2015). Matt Walsh eventually joined Hale with nominations in 2016 and 2017. But no other supporting men have contended for the series thus far.

Perhaps Simons has been kept at arm’s length by the academy because power-hungry Jonah is one of the show’s least likable characters. Hale and Walsh play more sympathetic political bumblers on the series, so maybe that’s why they were the first to get hugs from the Emmys. However, likability has never slowed down Louis-Dreyfus as the equally self-serving Selina Meyer, so perhaps the Best Comedy Supporting Actor race has simply been too crowded to accommodate more “Veep” cast members.

But we’ve polled more than a dozen Expert journalists for their Emmy predictions, and two of them think this is Simons’s year to break through: Matt Roush (TV Guide Magazine) and Ben Travers (IndieWire). He’s also predicted by three of our Top 24 Users, who got the highest scores predicting last year’s Emmy nominations. One of those top users betting on a bid for the sniveling politico is Simonluca Barletta, who tied for the ninth best percentage (76.35%) out of more than 3,000 total users who made their forecasts last year.

If Hale, Walsh and Simons all manage to get in this year, it would be the first time any show had three Comedy Supporting Actor nominees since the heyday of “Modern Family,” which last had that many contenders in this race back in 2013. But when you combine the predictions of all of our users thus far, Simons still trails with odds of 64/1. That means he’s still an underdog. But then again, so was Jonah Ryan.