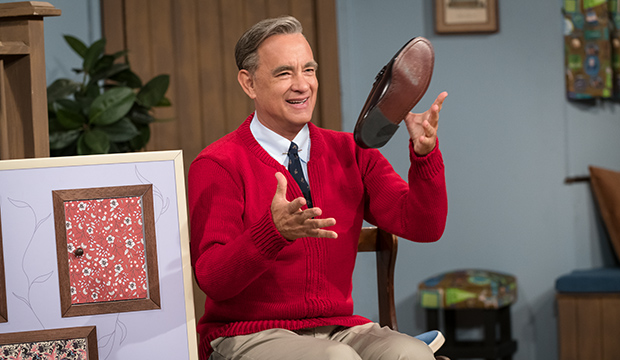 Wednesday, March 20 would’ve been Fred Rogers‘ 91st birthday. To mark the occasion, Sony/TriStar has released a new image of Tom Hanks as the beloved star from its upcoming film “A Beautiful Day in the Neighborhood.”

The shot is a freeze frame of one of Rogers’ iconic moments from his show “Mister Rogers’ Neighborhood”: when he tosses one loafer in the air while he’s changing into sneakers and singing the theme song. Altogether now: Aww.

Sony also tweeted the image, writing, “Happy Birthday, Mister Rogers! How has our favorite neighbor inspired you to spread kindness?”

Happy Birthday, Mister Rogers! How has our favorite neighbor inspired you to spread kindness? See Tom Hanks as Mister Rogers in #ABeautifulDayMovie. pic.twitter.com/AOVcXmdUNb

Directed by Marielle Heller, “A Beautiful Day in the Neighborhood” is inspired by the 1998 “Esquire” profile of Rogers by Tom Junod, a journalist whose perspective on life was changed after spending time with Rogers (Junod appears in the Rogers documentary “Won’t You Be My Neighbor?” if you recall). In the film, Matthew Rhys plays the cynical journalist based on Junod, named Lloyd Vogel, who’s assigned to profile the TV legend. (Rogers died in 2003 at 74 of stomach cancer.)

“A Beautiful Day in the Neighborhood” is slated to hit theaters on Nov. 22, just in time for awards season and the warm and cozy holiday season. Will this finally get Hanks another Oscar nomination after 19 years? Nothing’s certain with him anymore when it come to the Oscars, but we are definitely here for a Matthew Rhys film breakthrough.