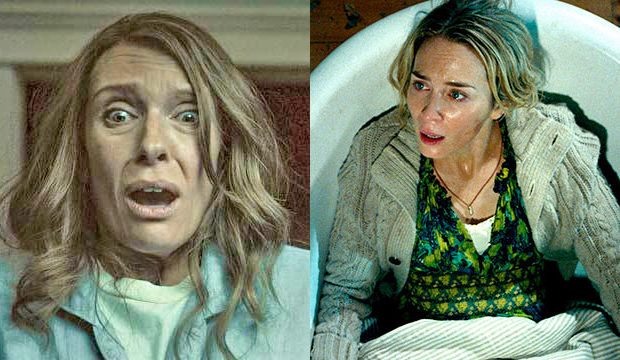 Even as the Oscars purport to honor the best in film, horror filmmakers and enthusiasts would probably beg to differ. The horror genre has had a lot of trouble getting into the Oscar race, even after 90 years, with a few exceptions here and there. Films like “The Exorcist” (1973), “The Sixth Sense” (1999) and “Get Out” (2017) have broken through and even earned Best Picture nominations — and in the case of horror/thriller “The Silence of the Lambs” (1991) even a win — but all four were undeniable hits with critics and audiences in their respective years, meaning the academy would have looked foolish to ignore them. Actors in horror films have a hard time getting in as well, even if they’re carrying the same level of hefty emotional weight as their peers in traditional drama films. This year, the academy has the potential to honor at least two strong horror performances that have earned acclaim: Toni Collette (“Hereditary”) for Best Actress and Emily Blunt (“A Quiet Place”) for Best Supporting Actress. The question is whether the Oscars can broaden their horizons and acknowledge such beloved performances.

SEEEmily Blunt (‘Mary Poppins Returns’): ‘I would never want to do some bad impersonation of Julie Andrews’ [Complete Interview Transcript]

Critics have been stumping hard for Collette ever since “Hereditary” debuted at Sundance a year ago. Pulling off one of the boldest performances in her career, Collette portrays Annie Graham, a mother grappling with tragedy in her family who soon comes to discover a sinister force that comes to haunt her. It is a fully committed performance that has certainly wowed critics all over the country, with Collette earning a Best Actress nomination from the Critics’ Choice Awards and even winning at multiple critics groups. WhatCulture called Collette’s turn “the most poignant, deeply-felt performance of 2018” in their end of the year roundup.

Such high praise has not quite translated to major Oscar precursors like the Golden Globes, SAG and BAFTA, but there is still a path for Collette to nab a spot in Best Actress. She surprised at the Oscars two decades ago with a Best Supporting Actress nomination for her emotional performance in another horror film, “The Sixth Sense,” despite not showing up at those other awards groups. Her performance in “Hereditary” is of the type you would rank no. 1 on your ballot, especially from those who have followed the derby so far and know she needs the support. With Glenn Close (“The Wife”), Olivia Colman (“The Favourite”), Lady Gaga (“A Star Is Born”) and Melissa McCarthy (“Can You Ever Forgive Me?”) virtually locked up, and uncertainty over that fifth slot, it’s plausible that the passion pick could win out.

Speaking of Best Actress contenders, much of Blunt’s Oscar campaign has centered on “Mary Poppins Returns,” but the popular star has the potential to instead/also get into Best Supporting Actress for a very different kind of performance in husband John Krasinski‘s “A Quiet Place.” In the film she plays Evelyn Abbott, a mother protecting her family from creatures who will attack them if they make noise. Blunt utilizes nonverbal communication for a majority of the film, relying on her face and body movements to bring her character to life, and critics agree that she certainly does so. “The Washington Post” observed that Blunt “emerges as the real star of a film whose themes of female silence, resilience and grit feel uncannily of the moment.”

Blunt stealthily entered the Best Supporting Actress race for this performance with a Screen Actors Guild Award nomination. “A Quiet Place” has had a relatively strong presence this award season, also securing nominations from the PGA, WGA and other guilds on top of being honored as one of AFI’s top 10 films of the year. It was indeed one of the biggest films of the year, grossing $188 million in the U.S., so chances are the Academy will have at least seen the film.

As far as Blunt’s Oscar prospects, Best Supporting Actress is shaping up to include Amy Adams (“Vice”), Regina King (“If Beale Street Could Talk”), Emma Stone (“The Favourite”) and Rachel Weisz (“The Favourite”), with that fifth slot up for grabs. If Oscar voters key into Blunt’s expert combination of strength and vulnerability in the film, she could very well sneak into this category.

What Collette and Blunt are doing in their respective films go beyond the traditional scream queen roles to which the academy may be adverse. They both convey a wide range of emotions as they protect their family from the dangers hidden beyond their home or come to grips with the dangers hidden within. While the horror elements can be too much to take for some, both performances accurately portray a real human fear, and it would be unfortunate if the academy passed over such gripping portrayals that are bound to haunt moviegoers for years to come. But maybe with the embrace of “Get Out” last year and a growing young membership, we could see a surprise or two come Oscar nomination morning.