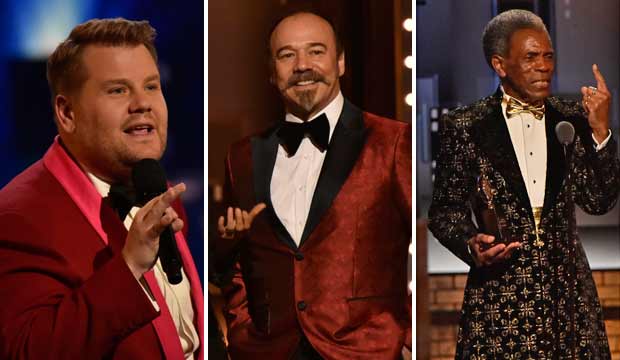 The 73rd Annual Tony Awards has wrapped up as one of the best editions of the annual Broadway celebration in recent memory. Take a look below at the many things that worked and the few things that didn’t during this year’s telecast (and check out the list of this year’s winners here).

In recent years I’ve felt like James Corden has been overused, so I wasn’t really looking forward to his return as host. But Corden rose to the occasion with his magnificent opening number. He highlighted the uniqueness of live theater while also taking some jabs at some of the unpleasantness of the modern theatrical experience. The parts about ticket prices and extremely uncomfortable seats were particularly resonant for me.

The rest of Corden’s performance as host was also good. Most of the bits were appropriately timed and didn’t overstay their welcome. His segment having nominees practice their gracious-loser faces felt like it was entering dicey territory when he had Jeff Daniels participate, but Daniels actually gave the funniest reaction. Later on, the segment where he invited attendees to start feuds to goose the ratings also felt like it was starting to go too long, but then seeing Audra McDonald and Laura Linney ready to throw down right there in the middle of Radio City Music Hall ended up being priceless.

The performances from the shows nominated for Best Musical and Best Musical Revival were all top-notch. The energy from “Ain’t Too Proud” was electric. Santino Fontana and Alex Brightman were amazing in their respective numbers, “Unstoppable” from “Tootsie” and “The Whole Being Dead Thing” from “Beetlejuice.” The performances from “The Prom” and “Kiss Me, Kate” were marvels of amazing choreography that can sometimes be very difficult to capture on TV. And the song from “Hadestown” was enough to make anyone want to buy a ticket.

After last year’s embarrassing presentation of the nominees for Best Play, the Tonys went back to giving the author of each nominated work a chance to discuss their pieces. Tarell Alvin McCraney‘s vision for “Choir Boy” was poetic, Heidi Schreck‘s presentation of “What the Constitution Means to Me” was moving, and Taylor Mac‘s raucous tribute to “Gary: A Sequel to Titus Andronicus” was something that only Mac could do.

Huge kudos to the powers that be at the Tonys for giving the cast of “Choir Boy” a chance to perform even though it was a play and it closed several months ago. It made me wish I had gotten to see it.

Did you think I would forget about the speeches? This year had several fantastic moments from the winners:

The amount of time Danny Burstein spent riding the gorilla puppet from “King Kong” felt like hours and had the emotional impact of watching a kid ride one of those little mechanical horses that you always see outside of K-Mart.

Showing just a couple of pictures for each of the nominees for Best Play Revival was very underwhelming. They couldn’t have gotten brief clips from a majority of those shows?

The orchestra felt like it was very eager to play off certain people. One of them was, unfortunately, André De Shields. As if cutting off a 73-year-old Broadway legend winning his first Tony wasn’t bad enough, they did the same thing to the first wheelchair-bound actor to win when Ali Stroker didn’t get a chance to thank her partner. For their incredible achievements, they should have been allowed as much time as they needed to say what they wanted to say.