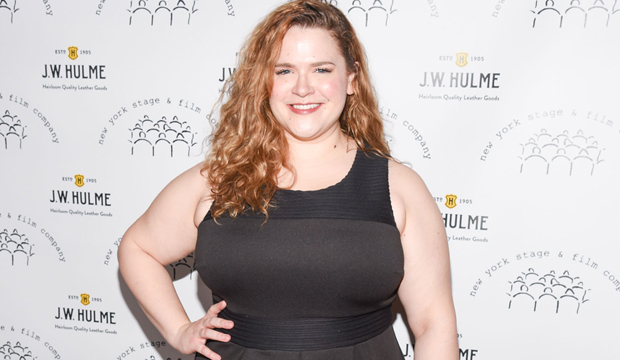 Thanks to an earth-shattering voice and impeccable comedic chops, Bonnie Milligan made one of the most talked about Broadway debuts of the season in “Head Over Heels.” Even though the show has been closed for months, she remains hotly competitive in the Tony race for Best Featured Actress in a Musical.

“Head Over Heels” is a deliciously camp mashup of genres and tropes. It uses the music of The Go-Go’s to adapt a 16th century prose poem by Sir Philip Sidney called “Arcadia” (the poem is often cited as inspiration for Shakespeare’s “As You Like It”). So when characters aren’t singing and grooving to “the beat,” they’re speaking in heightened prose. Think Heath Ledger’s “A Knight’s Tale,” but instead of classic rock infiltrating this Victorian setting, it’s a mix of 80’s era MTV and queer sensibilities lifted from ball culture.

Milligan portrays Pamela, a gloriously vain princess unable to find a suitor that is worthy of her beauty. That’s probably because Pamela truly desires her handmaiden Mopsa (Taylor Iman Jones), even if she doesn’t realize her same-sex longings at first. Pamela embarks on a journey of self acceptance that’s endearing to watch, but she never loses the sass and bite that makes her so fun to watch.

While Milligan makes an incredible entrance with a dynamite version of “Beautiful,” it’s her will-they-or-won’t-they relationship with Mopsa that allows the vocal pyrotechnics to fly. Pamela initially cannot accept her own sexuality and reacts angrily when Mops confesses her love. The women launch into angsty duet of “Automatic Rainy Day,” with Milligan unleashing a bewildering string of riffs to conclude the number. The actress made a name for herself in New York’s cabaret scene as “Belting Bonnie” and with her powerful, crystalline voice on full display, it’s easy to see why.

Arguably, Milligan’s most impressive sequence is a fit of jealous rage towards her sister, who has found companionship with a striking female friend. She leaps out from under a bed to ruin their moment, wondering when it will be her turn to find her own special someone. Pamela’s rage manifests in song through “How Much More,” where she literally tears apart the scenery while belting the song’s “I go crazy” refrain. The anger is played for laughs however, with Milligan delicately placing a pillow atop her pile of destruction in a hilariously pathetic attempt to cover up her outburst.

Critics were united in their love for Milligan’s outstanding debut. Melissa Rose Bernardo (New York Stage Review) called it “a star making performance” and Adam Feldman (Time Out NY) declared it “a triumphant Broadway debut.” David Cote (The Village Voice) gushes that “Milligan simply, gorgeously, rules every scene she’s in, with a first-rate pop soprano and killer comic timing.” Though Matt Windman (amNY) was clearly not a fan of the show’s camp factor, he still admits “The show’s spirit is best exemplified in casting Bonnie Milligan, who gives a breakout, personality-infused performance as a royal princess.”

The biggest factors working against Milligan’s Tony odds are the early closing date of “Head Over Heels” and competition from her own co-stars. The Tony Administration Committee ruled that the entire cast would compete in the Featured acting categories, so cast mates like Broadway veteran Rachel York and RuPaul’s Drag Race alum Peppermint could pull away some votes. But Bonnie Milligan’s sassy delivery and supersonic voice could help her overcome these obstacles and land a Tony nomination for her first ever Broadway role.

PREDICT the Tonys now; change them until April 30.