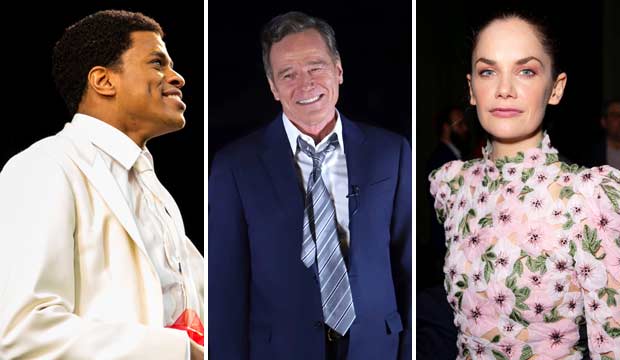 Out of all the nominees spread across the 26 categories at the 2018 Tony Awards, 20 of them stand out as particularly noteworthy. Check out the complete list of nominations here.

The following Broadway productions from this past season were completely shut out by the nominating committee: “Head Over Heels,” “Straight White Men,” “Pretty Woman,” “The Nap,” “The Lifespan of a Fact,” “American Son,” and “True West.”

Two of this year’s nominees for Best Musical (“Beetlejuice” and “Tootsie”) are screen-to-stage adaptations of classic Oscar-winning movies from the 1980s featuring Geena Davis.

Two of this year’s nominees for Best Play Revival (“The Boys in the Band” and “The Waverly Gallery”) are older works that made their Broadway debuts this past season. Meanwhile, “Torch Song” is a reprisal of Harvey Fierstein’s 1983 Tony-winning play, “Torch Song Trilogy.”

None of this year’s nominees for Best Play Revival received a corresponding nomination for directing. That hasn’t happened since 2001.

Several of this year’s acting nominees have now been nominated for both appearances they’ve made on Broadway to date: Annette Bening (“All My Sons”), Bertie Carvel (“Ink”), Bryan Cranston (“Network”), Eva Noblezada (“Hadestown”), Jeremy Pope, and Ruth Wilson (“King Lear”).

Jeremy Pope joins the ranks of Kate Burton, Dana Ivey, Jan Maxwell, Amanda Plummer, and Mark Rylance as only the sixth actor to be nominated for two Tonys in different categories in the same year.

After having previously been nominated for her Broadway debut in 2015 for “Constellations,” “King Lear” marks the second time Ruth Wilson ended up being the sole Tony nominee from her production.

After having received nominations for her five previous appearances on the Great White Way (including a win last year for “Three Tall Women”), “King Lear” marks the first time Glenda Jackson opened a show on Broadway, but did not receive a Tony nomination.

Two-time Tony winner Laurie Metcalf (“A Doll’s House, Part 2,” 2017; “Three Tall Women,” 2018) is nominated for the fourth year in a row for her performance in “Hillary and Clinton,” and this also marks the first time she’s the sole representation for her show since 2016.

Two of this year’s nominees for Best Actor in a Play are Emmy winners — Bryan Cranston (“Network”) and Jeff Daniels (“To Kill a Mockingbird”) — taking on roles that previously won Oscars for their film counterparts — Gregory Peck for “To Kill a Mockingbird” in 1962 and Peter Finch for “Network” in 1976.

“The Cher Show” not only marks Stephanie J. Block’s third Tony nomination, but also her first for a new show that’s still running. Her two previous nominations were for revivals (“The Mystery of Edwin Drood,” 2013; “Falsettos,” 2017) that had already completed their limited runs by the time nominations were announced.

“The Boys in the Band” is Robin De Jesús’s third Tony nomination, but it’s his first for a play. His two previous nominations were for musicals (“In the Heights,” 2008; “La Cage aux Folles,” 2010).

“Ain’t Too Proud” is Des McAnuff’s first nomination for directing since “Jersey Boys” back in 2006. However, he was nominated as a producer of the 2012 revival of “Jesus Christ Superstar” as well as Best Musical nominees “Matilda” (2013) and “Groundhog Day” (2017).

This year is the first since 2012 when a production receives a Tony nomination for Best Director, but was snubbed for Best Play. That year it was Nicholas Hytner for “One Man, Two Guvnors.” This year, it’s Bartlett Sher for “To Kill a Mockingbird” and Ivo van Hove for “Network.”

“The Prom” marks the first time Casey Nicholaw received a Tony nomination for directing, but not choreography. The opposite happened in 2014, when he was nominated for choreographing “Aladdin,” but not directing.

Adam Guettel’s nomination for “To Kill a Mockingbird” marks the fourth time this decade that a play was recognized for Best Original Score. In 2010 “Enron” and “Fences” both received nominations in this category. In 2012 “One Man, Two Guvnors” and “Peter and the Starcatcher” received bids. Last year “Angels in America” earned a nomination.

Camille A. Brown’s nomination for “Choir Boy” is the third time this decade that a play was recognized for Best Choreography. The two previous times were in 2015 for “The Curious Incident of the Dog in the Night-Time” and last year for “Harry Potter and the Cursed Child.” Both of those were courtesy of Steven Hoggett.

PREDICTTony Awards now and change them until June 9