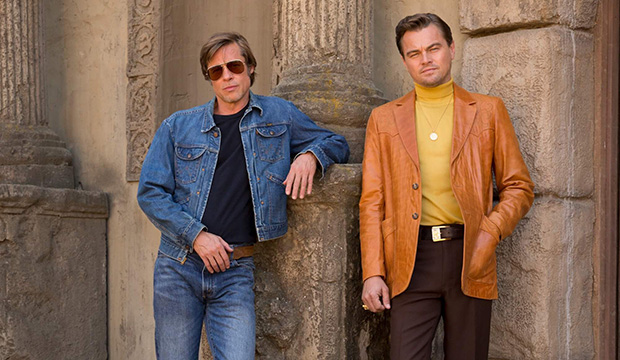 Frontrunners are already forming for Oscar’s Best Picture race, according to early combined predictions at Gold Derby. While most films in contention have not yet been released, enough teaser trailers are out there, ranging from “A Beautiful Day in the Neighborhood” and “The Irishman” to “Little Women” and “Ford v Ferrari” to provide some sense of what at least feels like a worthy contender. We’ve confirmed category placements with studios or campaigners, but — as awards season veterans know — such labels can change later. And once the fall film fests commence, the standings will likely rapidly shift.

Here are the current top 10 Best Picture picks on the Gold Derby site, in order, as of Aug. 23:

1. “Once Upon a Time in Hollywood”: Oscar voters love to look into a big-screen mirror and see their chosen profession reflected back at them. Sure, Quentin Tarantino‘s fairy-tale time capsule takes us back to 1969, when the decade of peace, love and understanding would come to an abrupt end as an unpopular war would continue to rage and protest would fill the streets. But he somehow sweetens the past with wistful nostalgia, and makes a TV Western star (Leonardo DiCaprio) with a fading career and his loyal stuntman (Brad Pitt) into heroes in real life. The filmmaker himself, who made chopped-up narratives a la 1994’s “Pulp Fiction” the essence of storytelling cool, has yet to win a Best Picture trophy. That rapid-fire neo-noir competed for the prize as did his 2009 revisionist World War II “Inglourious Basterds” and 2012’s Antebellum-era Western “Django Unchained.” This could be the one that does the trick.

2. “The Irishman”: Many, including myself, thought that Martin Scorsese’s 1980 “Raging Bull” and 1990’s “Goodfellas” should have claimed Oscar’s most coveted prize. The irony, of course, was that he lost to two actors who were making their directing debuts: Robert Redford’s “Ordinary People” and Kevin Costner’s “Dances With Wolves.” Instead, he won for 2006’s Irish mob film “The Departed,” which was based on a 2002 Hong Kong movie “Infernal Affairs.” But “The Irishman” feels more substantial as it reunites Robert De Niro and Joe Pesci while giving Al Pacino his first role in a Scorsese film with this violent reality-based gangland saga that spans decades.

3. “Little Women” (Opens Dec. 25): Actress Greta Gerwig made quite a splash when she became just the fifth woman to be nominated and the first in eight years for Best Director with 2017’s “Lady Bird,” her first solo helming debut. The comedy about a headstrong high-schooler would receive four other nods, including Best Picture and for Gerwig’s original screenplay. For her second feature, she decided to tackle the mother of all books about sisterhood, Louisa May Alcott’s “Little Women.” If you thought “A Star Is Born” has been remade to death, consider that eight previous films have depicted Jo, Meg, Amy and Beth March and their mother Marmee as their father is away from their New England home during the Civil War. But Gerwig breathed fresh life into a coming-of-age story with her first feature and she seems fully capable to a 21st-century version of this classic that is relatable to today’s forward-thinking females.

SEEMeet the 5 female directors who were nominated for an Oscar

4. “1917”(Opens Dec. 25) : It’s been 20 years since English theater director Sam Mendes switched his focus to cinema with his 1999 film debut, “American Beauty,” a pungent satire of middle-class suburbia. The film won Best Picture while he took home the directing trophy.  But that was the only time he was up for those awards. Mendes might be in the mix again, however, with this World War I yarn about two young British soldiers who race against time as they try to stop a battalion from walking into a deadly trap. It has been a while since a war film actually won an Oscar — “The Hurt Locker” in 2008.

5. “A Beautiful Day in the Neighborhood” (Opens Nov. 22): For some reason, the documentary branch last year failed to nominate Morgan Neville‘s acclaimed “Won’t You Be My Neighbor,” a tribute to children’s TV show host Fred Rogers — which became the highest-grossing biographical doc of all time. The rest of the the Academy voters can now make up for that oversight with Marielle Heller‘s film about the fateful meeting between Mr. Rogers (Tom Hanks) and a cynical “Esquire” profile writer (Matthew Rhys). Heller collected plaudits for her two previous features, 2015’s “The Diary of a Teenage Girl” and 2018’s “Can You Ever Forgive Me?”

6. “Marriage Story”: This is a 21st-century update of “Kramer vs. Kramer,” about a contentious bicoastal divorce between a stage director (Adam Driver) and his TV actress wife (Scarlett Johansson). Director and writer Noah Baumbach has previously cashed in on human foibles and difficult personalities while focusing on families, especially in 2005’s “The Squid and the Whale,” 2007’s “Margot at the Wedding” and 2017’s “The Meyerowitz Stories.”

7. “The Farewell”: Another female-directed movie makes the cut. Bejing-born, Miami-raised director/writer Lulu Wang has been declared a star in the making ever since her 2014 feature debut “Posthumous” landed. Her second film came about after she shared a story on NPR’s “This American Life” in 2016 about how her grandmother wasn’t told about her terminal cancer diagnosis by her family and how they staged a wedding as an excuse to have one last reunion. That tale became the basis of Sundance sensation, “The Farewell,” which opened in July and stars comic actress Awkwafina  (“Crazy Rich Asians”) as Wang’s stand-in in a more serious and emotion-driven role.

8. “Jojo Rabbit”(Opens Oct. 18): If Mel Brooks can get away with “Springtime for Hitler” in “The Producers” then New Zealand kidder Taika Waititi (2017’s “Thor: Ragornak,” 2016’s “Hunt for the Wilderpeople”) can poke fun at the Third Reich as a young German lad in a Nazi youth camp is best friends with an imaginary Hitler — played by director/writer Waititi himself. The twist is, the lonely boy discovers that his mother (Scarlett Johansson) is hiding a young Jewish girl in their attic. You can’t say you have seen this movie before.

9. “The Laundromat” (premieres Sept. 1 at the Venice film festival): A widowed tourist (Meryl Streep)  takes a dream vacation to Panama City, only to get entangled in a illicit offshore tax scheme — dubbed the Panama Papers — that is run by a pair of shady but seductive lawyers (Gary Oldman, Antonio Banderas).  Director Steven Soderbergh previously was nominated twice for directing a pair of Best Picture candidates — 2000’s “Erin Brockovich” and “Traffic,” which won him the gold for “Traffic.” His best pic chances were blocked by Ridley Scott’s  “Gladiator.” Seems like this guy who first landed on the scene 30 years ago with 1989’s “Sex, Lies and Videotape” and helped kick off a rush of indie films seems due for some Academy Award attention in the top category.

10. “Ford v Ferrari” (Opens Nov. 15): This truth-based film directed by James Mangold (2005’s Best Picture nominee “Walk the Line”) has a pair of popular actors, both working together onscreen for the first time, who could take away some of Leo and Brad’s starry glow above. Christian Bale plays speed-demon British racer Kevin Miles and Matt Damon is American visionary carmaker Carroll Shelby who are both hired by Ford to make a racing car that could beat Italy’s Enzo Ferrari at the 24 Hours of Le Mans in France.

Which foreign language film could be the next 'Parasite' in the 2021 Oscar race?

'Hollywood': Will Ryan Murphy's revisionist history get a happy ending at the Emmys?