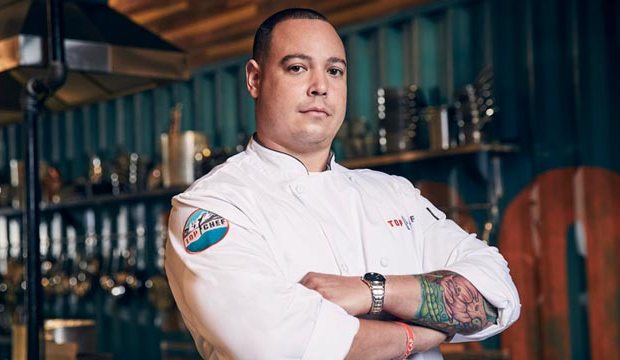 After an epic three-team “Restaurant Wars” showdown that sent two chefs home on last week‘s “Top Chef,” the 10 contestants still in the competition were shocked to find themselves in the midst of a “Last Chance Kitchen” battle to determine who would re-enter the game. Later, Ken Oringer joined series hosts Padma Lakshmi, Tom Colicchio and Graham Elliot for a flapping good time at a Roaring ’20s party with on-theme munchies prepared by the contestants.

Below, check out our minute-by-minute “Top Chef” recap of Season 16, Episode 6, titled “Roaring Munchies,” to find out what happened Thursday, January 10 at 8 p.m. ET/PT. Then be sure to sound off in the comments section about whether or not the right decision was made at this week’s Judges’ Table.

8:00 p.m. – For Brian Young, Restaurant Wars was a huge confidence booster after he performed below his standards in the challenges preceding it. Everyone else was in damper spirits after the hell that the challenge was.

8:02 p.m. – When the chefs arrived at the main kitchen they were greeted by Tom and Brother Luck (from season 15) and Nini Nguyen (eliminated last week) who were in the midst of a Last Chance Kitchen battle in the style of a mini-Restaurant Wars. In this special Quickfire Challenge Nini and Brother had to create a three course concept menu including a remake of a previous dish and two more original dishes. Because it was Restaurant Wars, Nini and Brother randomly selected contestants to be part of their team of sous chefs. On Nini’s team was: Michelle Minori, David Viana, Justin Sutherland, Eric Adjepong and Brandon Rosen; on Brother’s team: Brian, Kelsey Barnard Clark, Eddie Konrad, Sara Bradley and Adrienne Wright.

8:06 p.m. – In first courses, Nini put forth fried shrimp and Brother served Southwestern and Japanese jalapeno poppers. In second courses, Nini made pork chop while Brother made scallops. Based on comments it was Nini who took the first course and Brother who took the second, leaving it all down to the third. In that final course, Brother plated a seared tuna with pico de gallo and Nini gave the judges a tapioca pudding with bananas foster.

8:11 p.m. – In the end Tom decided that his favorite meal came from Brother and so he entered the season 16 competition and earned his team an advantage in the next challenge.

8:12 p.m. – For the Elimination Challenge, Padma informed the chefs that they’d be serving at a 1920s themed party where they’d create canapé dishes inspired by Prohibition Era cocktails. The advantage earned by Brother’s win was the opportunity to choose which drink would inspire their dishes.

8:22 p.m. – After 30 minutes and $400 each of shopping at Whole Foods the chefs headed back to the kitchen to begin prep on their dishes. Those dishes ranged from duck a l’orange, creme puffs, oysters and salmon crudo. Tom and Graham stopped by for a check-in where they questioned whether some of the dishes would translate well into the all-in-one-bite canapé style.

8:27 p.m. – Later back at the house, Brother got to know all the chefs, but received cold shoulders from some, including Kelsey who seemed frustrated that a new player had entered the game.

8:34 p.m. – The next day in the hotel kitchen Brian was concerned that he poorly planned and could have too much to do to finish his sausage while Brother struggled to dilute a strong flavor to his chili.

8:36 p.m. – In first service, based on the “Old Fashioned” Eddie made bourbon-cured smoked salmon, based on the “Whiskey Sour” Brandon made a duck and artichoke croquette and based on the “Southside Fizz” Brother made a chicken salad. Of the three, Eddie got the most positive response while Brandon’s was mixed and all the judges agreed that Brother’s was way too spicy and not all that related to his cocktail.

8:39 p.m. – In second service, Brian served his sausage and gnocchi based on “The Last Word,” Kelsey prepped a bay scallop ceviche based on the “12-Mile Limit” and Michelle made a liver mousse gouger based on the “Whiskey Sour.” The inspiration of Michelle’s dish missed the mark whereas Kelsey’s was right on target. Brian’s dish was a huge disappointment–Tom referred to it as “sand in a cup.”

8:45 p.m. – In third service, Justin made duck a l’orange based on the “Old Fashioned,” Sara made bay scallops crudite based on “The Last Word” and Eric prepared oysters based on the “12-Mile Limit.” Graham called Eric’s oyster one of the best things he’s tasted in a long time, Tom was impressed by the complexity of Justin’s dish and the whole table of judges was not high on Sara’s plate.

8:47 p.m. – In the fourth and last service, David served a shrimp tartare and Adrienne made shrimp and avocado toast, both based on the “Gin Rickey.” The judges loved both dishes and the chefs themselves recalled hearing people around the party mentioning that they loved them, too.

8:49 p.m. – At Judges’ Table, Kelsey, Eric and Eddie were declared the top three performers of the night. In their dishes they loved the curing that Eddie did, the visual appeal of Kelsey’s and the level of difficulty involved in Eric’s. Overall, the most creative and best bite they had belonged to Eric and so he was declared the challenge winner, his first solo win of the season!

8:56 p.m. – Brian, Sara and Brother were the three unlucky chefs to fall into the bottom. The judges questioned Sara’s choice of protein, were frustrated by Brian’s execution of his gnocchi and lamented Brother falling into the bottom because he went too left field yet again. Based on those critiques, the hammer came down on Brother, who left the competition as quickly as he entered it, but would have another shot to re-enter in another stint in Last Chance Kitchen.

NEXT WEEK: Lena Waithe stops by to help judge a Quickfire and a butchering and meat-focused Elimination Challenge gives Graham a dish he’s never even heard of. 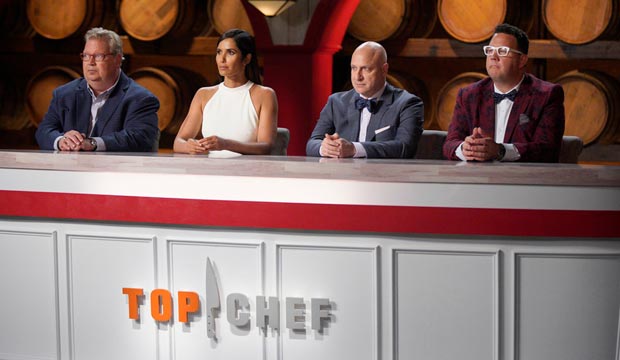