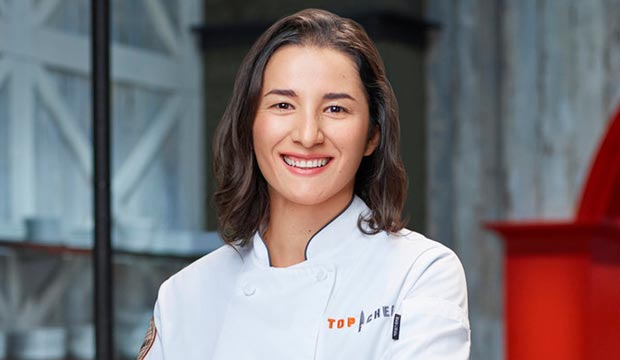 As Dorothy once said about Oz, people come and go so quickly on “Top Chef.”

Last week, San Francisco area chef Michelle Minori  (above) won the music-inspired challenge in Nashville. But this week’s basketball-themed assignment of making court-side dishes that were served at the Rupp Arena at the University of Kentucky led her to make ribs whose sauce was good but the meat itself was too wet.

So welcome to “Last Chance Kitchen” where Michelle will be subjected to basketball puns including whether current LCK resident David Viana, a New Jersey chef, might block her shot to redeem herself.  She strides into the cooking area “ready for war.” David loves Michelle as a person but “she’s going down.”

Host and judge Tom Colicchio asks if she surprised to be eliminated. She admits she was. Tom says he is giving her another chance to make her best game-day dish. Out comes a shot clock. He explains it wasn’t until this device was introduced to the sport that the action on the court sped up. “Each team gets possession of the ball for a limited amount of time before they have to shoot.” We see where this is going – sub the ball for a utensil that they are really going to need. In this case, a knife. One they have to share. David is aghast. “Using someone else’s knife is like kissing your sister.”

The peanut gallery of seven other eliminated chefs will play referee. David opts to take the knife second, presumably so he can get his ingredients. Tom tries to lift their spirits with an array of Hidden Valley Ranch products that can help their flavor game since they are LCK’s sponsor.

Michelle is making pasta, not easy in 30 minutes. Her trick is to put the pasta in a vacuum to force rest it. Meanwhile, David is making a meatball. He is doing a Mediterranean version with pomegranate tomato sauce, lavash cracker and a goat cheese Hidden Valley Ranch mousse. Michelle says she will serve her pasta with a quick Bolognese sauce. The cool thing is, neither one is using the knife yet.

David finally grabs it to slice up his meat. Then Michelle swoops in to use it to cut up bacon. And chop, chop, chop they go. David is so annoyed by the interruptions he is using his hands to break up bread and soak it in milk for his meatball. Michelle is making little ear pasta aka orecchiette. Her worry is whether her water will boil. The clock ticks down, David gets the knife one last time and it’s all over but for the tasting.

The verdict? Tom knows the chefs are anxious because all they need is to win one more challenge and they get to go back to “Top Chef.” Tom liked the pasta but it got a little oily. He appreciated that David made lavash bread and his goat cheese mousse. But when he bit into the meatball, he got a too-big chunk of bread. And it is Michelle who will go on. Got to say, making pasta with the knife shenanigans going on was pretty bad-ass. David takes his leave and Michelle has regained her confidence.