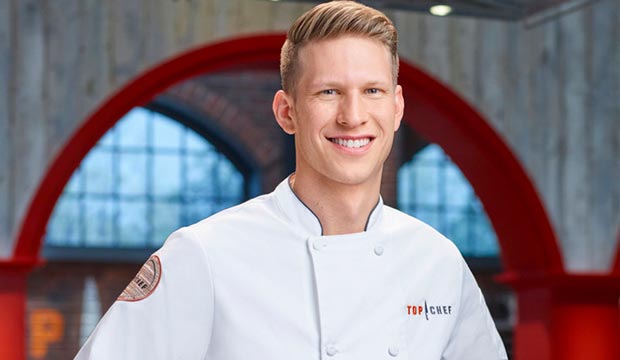 The deeper “Top Chef” gets into its 16th season, the better the skill set of those cooks who get eliminated. That means the competition gets even hotter on its web-only after-show,”Last Chance Kitchen.” Scroll down for our recap of the January 24 episode.

On “Top Chef,” Brian Young – who won one of the most treacherous Restaurant Wars challenges ever just weeks ago  – failed to do justice to his porchetta-style pork roll for the party boat challenge and was duly told to pack his knives and vamoose.

As Tom Colicchio asks, “Can Brian redeem his shipwreck on Lake Cumberland?” He will be facing off with Brandon Rosen of San Mateo, California (seen above), who was taken down by a disastrous Asian-style tartare last week on “Top Chef,” but went on to prevail in “Last Chance Kitchen.” Boston native Brian, who is into butchery, says he has never been more embarrassed in his whole life by his underwhelming pork, blaming his situation on some bad spur-of-the-moment decisions.

Not that it has dampened his dry sense of humor as he cutely says, “Hi, Brandon,” and Brandon cutely waves back. “Whenever you go against a buddy you don’t want to hurt him too bad,” Brandon says. “At the same time, I came here to win.” Brian is not pleased by Tom’s bringing up his porchetta problems yet again. This time, he wants to do right by meat.

The guys have a refreshing  frenemy-like rivalry. Brandon says, “What’s the challenge going to be?” Answers Brandon, “Something that involves me kicking your butt!” Game on, sassy boys.

Out comes a table of various pig parts. Pork ears, skin, trotters and tail. Basically, Babe the pig’s worst nightmare. Because such items need a bit longer to stew, the chefs get a whole hour to work their swinish magic. Brandon notes Brian has more experience handling such products so he wants to use as many pieces as possible.

Brian grabs pig ears and tail. He isn’t quite sure what to do with them but he wants to get them in a pressure cooker as soon as possible.

The peanut gallery of five previously eliminated chefs ask questions about their game plans. Brandon wants to do a pulled pork sandwich. He teases Brian, asking what happened on his last challenge. “You don’t remember?  Oh, you weren’t there!”

Brian decides to make a sauce and goes for a spicy tomato version called puttanesca because “pig tails, pig ears, these are things that are used in Southern Italian cuisine, which I have a lot of knowledge about.” Their observers take note of the chefs’ dueling pompadours, “Neither one of their hair moves.”

Brandon, who admits to Tom he doesn’t cook with pig parts all that much, says he will either make a tartine or a sandwich. Suddenly, there are 15 minutes left — or, as Brian says, “15 minutes of straight hauling ass.”  The chefs are down to the wire. Brian says Brandon’s food looks, um, cute, but his looks rustic and great. He serves pigtail puttanesca with mussels, crispy pig ears and kale. Brandon dishes out pig trotter and tail crostini with celery salad and crispy pig ears topped with pimeton aioli.

The verdict: Tom says, “Both dishes were fantastic. They had me grinning ear to ear (pun alert).” He decides to reward the dish that best utilized the pig parts. And Brandon lives to cook another day. The lesson learned here: When life gives you pig ears, make them the star of your plate.

My verdict: With such great back-and-forth rapport, I wish Brandon and Brian did a cooking show together.