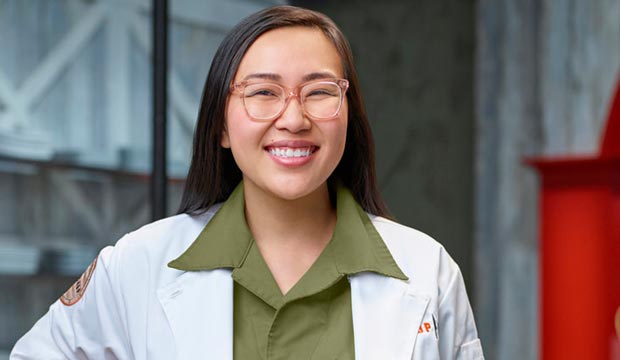 This week’s “Last Chance Kitchen” may have been the mother of all of the “Top Chef” after-shows, what with four chefs competing and two rounds of competition, the last requiring the assistance of the 10 remaining players from the main show. Plus, there was a bit of controversy. I call out the fact that one chef, Brother Luck, did not create a recipe on the spot and instead relied on a signature dish that is already on the menu at his restaurant.

With a special mega two-part edition of “Last Chance Kitchen,” which is available after “Top Chef” airs each week, Bravo is clearly placing more emphasis on this nightcap of a online series by making it even more integral to the main TV course. Below, check out our recap of this week’s online episode.

PART ONE: Thanks to their culinary misfires during this week’s conclusion of Restaurant Wars on ‘Top Chef,’ eliminated contestants Nini Nguyen (shown above) and Pablo Lamon join Season 15’s Brother and the current season’s Natalie Maronski, who has helped knock out two veterans already on “Last Chance Kitchen.”

To be truthful, Pablo has struggled to produce top-notch food all along. But Nini is the real deal, having won two elimination challenges with her deliciously inventive plates before being dismissed. Her fatal error was mishandling the front of the house in her restaurant and leaving her labor-intensive chocolate dessert for others to finish.

Judge and host Tom Colicchio notes that Brother has survived more “Last Chance Kitchen” rounds than anyone in ‘Top Chef’ history. Nini finds Brother’s large stature intimidating but also thinks the talented Natalie is just as scary. Tom then explains that one of the four will be returning to “Top Chef” immediately.

Tom says that they will stage a mini restaurant battle as their challenge. All four chefs must come up with a concept for their eatery and then create a signature dish that represents it. All in just 30 minutes. Natalie decides to figure out a dish first and then think of a theme. She is going for scallops with braised Napa cabbage, summer vegetables and a mushroom broth. That sounds too simple.

Nini has an intriguing delta concept, tying together New Orleans and Vietnamese cuisine. Her dish: lemongrass grilled pork chop with corn and tomato salad. Brother is doing a twist on jalapeno poppers using a tempura, a way to mix Southwestern and Japanese flavors. Pablo wants to be redeemed for his bad carrot puree in Restaurant Wars. He is going the veggie route with pan-seared carrots, herb yogurt and pickled carrots. That sounds too safe.

Brother has a possibly unfair advantage since he makes a dish that is already his signature at his own restaurant. As Nini points out, she started imagining her recipe from scratch. Tom’s tastes the food. His least-liked dish was Pablo’s overly acidic vegetables. And Natalie’s waffling over her concept might have affected her cooking. Both she and Pablo are goners.

Brother and Nini move on to the next round. It requires the chefs to make their signatures again as well as two other courses. The winner will return directly to the competition on “Top Chef.”

SEE Get to know the chefs of ‘Top Chef’ Season 16: Kentucky

PART TWO: Brother and Nini are told by Tom not only do they have to make upgrades from his suggestions about the signature dishes from the last round. They must come up with two more recipes that fit in with their restaurant concept. They get an hour to make all three courses. That seems very ambitious, but there is an added twist: “The first course lands at the 30-minute mark, the second course at the 45-minute mark and the last course lands at the one hour.”

But then Tom says he will give them some help, but they also need to make enough dishes to allow the audience of “Last Chance Kitchen” losers to sample, too. Nina and Brother pull knives to see which current “Top Chef” players will be their five sous chefs. They know Nina but Brother has no clue who they are. In a bit of irony, Justin Sutherland will be assisting Nina after he threw her under the bus during the Restaurant Wars judging.

Tom also helpfully tells Nini (this is why I have a judge-crush on the guy) that one reason she failed as a leader on Restaurant Wars was that she wasn’t assertive enough. Talent alone can’t get you the top prize. The clock starts and Brother runs about while Nina is more organized.

The sous chefs walk in. Tom explains what is going on and breaks it to them that they are the help. Nini yells out their duties like a true boss. Her first course is a Po’Boy shrimp with fish sauce chili glaze. Justin will be frying the shrimp. As if she isn’t being bold enough, Nini warns, “If I don’t win, I will haunt you guys in my nightgown.” It is a definite advantage that she already knows her helpers because, as even Justin says, “We don’t need no strangers in our house.”

As for Brother, he is focused on handing out duties rather than learning names. He will try to build more Japanese flavor in his jalapeno poppers by adding pickled cucumber and carrot tsukemono to the dish. At the half-hour mark, they serve their first course.

The next course? The lemongrass pork chop with corn and tomato salad for Nini and cumin-dusted scallop with yuzu guacamole and kuquat gastrique from Brother. Kesley Barnard is on Brother’s team but wants Nini back in their room, so she can braid her hair once more. Although Kelsey owns up to briefly thinking about over-spicing Brother’s dish, she cares more about notching a win.

Tom says that Nina successfully got more flavor in her food this time. As for Brother’s dish, Tom says it is nicely balanced and has great texture. He gets a “nice work” and it is the tasters’ favorite dish.

Next up is Bananas Foster for Nini. She wants to present a whole three-course meal while Brother is serving more appetizer-size dishes —  in this case, tuna slices seared rare. Who will return to the TV contest? We will learn on “Top Chef” next week at 8 p.m. ET/PT on Bravo.