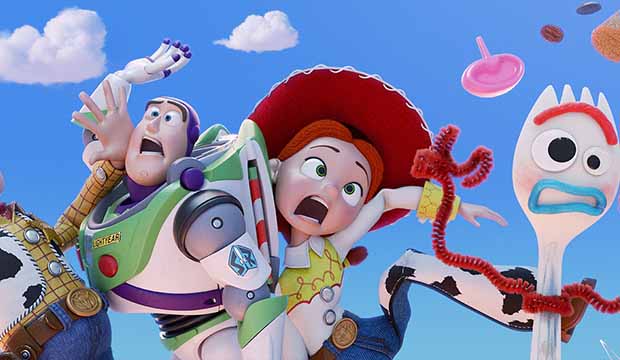 When it comes to the Oscar for Best Animated Feature, no studio has been more prolific than Pixar, having gotten nine wins in the category, most recently with “Coco” (2017). (See the complete list of animated feature champions.) They’ve also received three additional nominations, a streak they’re looking to keep going with “Toy Story 4.”

Woody (Tom Hanks), Buzz (Tim Allen) and the gang are now part of Bonnie’s toy collection but Woody’s not feeling as important to Bonnie as he was to Andy. On her first day of kindergarten, Woody sneaks into her backpack and stealthily helps her create a new friend, Forky (Tony Hale). Forky is very reluctant to see himself as a toy and repeatedly tries to return to the trash where he came from. When Bonnie’s family goes on a road trip and Forky escapes the RV, Woody jumps out to rescue him. As Woody and Forky aim to return to Bonnie, Woody is reunited with Bo Peep (Annie Potts) and also comes across a slightly menacing talking doll named Gabby Gabby (Christina Hendricks). At the same time, Buzz and the gang try to locate Woody and get him back to the family.

There are many reasons why “Toy Story 4” is thought to already be a favorite in this category. The first thing is that academy voters definitely didn’t mind making the last film in the franchise the first sequel to win the category in 2010. There’s no reason to think that they wouldn’t mind giving it to that film’s sequel. Also, with the last film’s ability to crack major categories like Best Picture and Adapted Screenplay, it’s not a huge leap to think this one might get nominated in those same categories.

Also, remember that many critics were skeptical of the need for a fourth film in the series since the third seemed to have wrapped things up so neatly. Once the critics saw the movie, directed by Lee Unkrich, they overwhelmingly warmed up to the film and the new characters. The surprise of how good it turned out to be may elevate it in the minds of many voters.