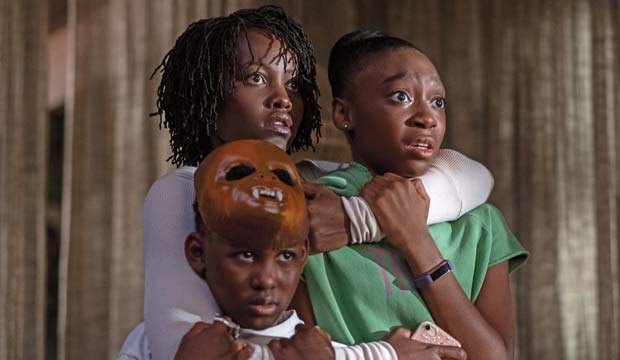 “Get Out” came as a big surprise two years ago. It was the feature directing debut for Jordan Peele, a horror film from a man better known as a sketch comedian. But it turned into a critically acclaimed blockbuster and an unlikely Oscar winner. Will lightning strike twice for the rising filmmaker? He’s back with his second directorial effort, “Us,” which is also a socially conscious horror film, this time about a family led by Lupita Nyong’o and Winston Duke who encounter a group of sinister doppelgangers. But how does it compare to Peele’s breakthrough effort?

Quite well, as it turns out. As of this writing “Us” has a MetaCritic score of 81 based on 52 reviews counted (49 positive, 3 mixed, none negative). That’s not far from the 84 score for “Get Out.” And on Rotten Tomatoes, which rates films on a pass-fail basis, “Us” is 95% fresh based on 218 reviews (207 positive, 11 negative). That’s only slightly lower than the 98% freshness rating for “Get Out.” Both “Us” scores are a bit of a step down, but if those are the kinds of critical marks you get for your less acclaimed movie, I’d say you’re doing alright for yourself.

But will Peele take the Oscars by storm again? With “Get Out” he made history as the first black filmmaker to earn nominations for writing, directing and producing in the same year. And he also became the first black writer ever to win Best Original Screenplay. “Get Out” might have even come close to beating “The Shape of Water” for Best Picture. However, one thing Peele had in 2017 that he doesn’t have now was the element of surprise. “Get Out” came out of nowhere with a style and point of view we hadn’t quite seen before, but now that he has established his brand of horror as cultural commentary, will awards voters still be on the bandwagon?

Monica Castillo (RogerEbert.com): “Jordan Peele isn’t the next Kubrick, M. Night Shyamalan, Alfred Hitchcock or Steven Spielberg. He’s his own director, with a vision that melds comedy, horror and social commentary. And he has a visual style that’s luminous, playful and delightfully unnerving … ‘Us’ is another thrilling exploration of the past and oppression this country is still too afraid to bring up.”

Tasha Robinson (The Verge): “The new movie isn’t as unconventional as ‘Get Out,’ or crafted with the same kind of watchmaker’s attention to how every tiny gear fits together. But it’s striking and unsettling, the kind of horror movie designed to make audiences walk away feeling leery about ordinary things around them, from shadows at night to mirrors to rabbits to scissors.”

Manohla Dargis (The New York Times): “‘Us’ is more ambitious than ‘Get Out,’ and in some ways more unsettling. Once again, Peele is exploring existential terrors and the theme of possession … A vibrant, appealing screen presence, Nyong’o brings a tremendous range and depth of feeling to both characters, who she individualizes with such clarity and lapidary detail that they aren’t just distinct beings; they feel as if they were being inhabited by different actors. “

Emily Yoshida (Vulture): “Ideas about a hidden or bifurcated America abound in ‘Us.’ It’s a home-invasion thriller paired with a more vast and ambitious science fiction conceit … In that regard only it is comparable to Peele’s beloved breakout ‘Get Out’; the filmmaker has a great sense of how to counterpoint interpersonal drama with big phenomena. But it’s a messier film than ‘Get Out,’ in that it never quite gets around to saying the things it’s trying to say.”