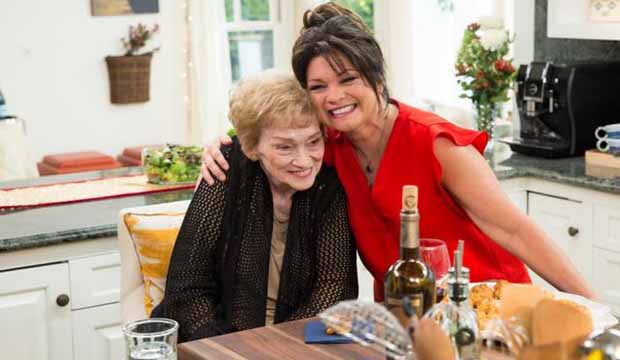 Because we invite them into our homes, TV series regulars have a way of feeling like friends or even family. That is certainly true of  the gang from “One Day at a Time,” the Norman Lear-created  comedy series that aired on CBS from 1975 to 1984. Bonnie Franklin, who played a divorced mom and career woman who was raising her two daughters solo, and Mackenzie Phillips, who was the defiant older teen Julie, were highly relatable. But it was Valerie Bertinelli, as quick-with-a-quip little sis Barbara, who became America’s sitcom sweetheart.

She would win two Golden Globes for as Best TV Supporting Actress for her role as Barbara Cooper. But even though the actress would go on to headline a series of popular made-for-TV  movies in the ’80s and ’90s with such  attention-grabbing titles as “The Princess and the Cabbie” and “The Seduction of Gina” before becoming a heavenly creature named Gloria on “Touched by an Angel,” she was never nominated for an Emmy individually – not even for her more recent work on TV Land’s “Hot in Cleveland”  — until now.

How did Bertinelli, who made her TV debut  in a 1974 appearance on the drama series “Apple’s Way” finally earn such recognition? One meal at a time, as a Food Network celebrity chef. She currently hosts a newly launched game show on the cable channel, “Family Food Showdown” –  a sort of “Family Feud” that pits two clans against one another in the kitchen – which airs at 10 p.m. ET/PT on Mondays.

But her Daytime Emmy bid for Best Culinary Host is for another Food Network show that is shown on Sunday mornings, “Valerie’s Home Cooking.” Bertinelli shares her recipes and tips while offering a slice of her own life by featuring family members including her mother, Nancy (see above), her financial planner husband Tom Vitale, neighbors and even reunites with her “Hot in Cleveland” co-stars Betty White, Jane Leeves and Wendie Malick.

Bertinelli is also an executive producer on the show, which is up for Best Culinary Program for the second year in a row. Other series competing in the category are “Lidia’s Kitchen” and Cook’s Country, both on PBS; Amazon Prime Video’s Eat. Race. Win.; “Giada Entertains”; and the Food Network’s “Barefoot Contessa: Cook Like a Pro.”

Her transformation into becoming a TV chef and Food Network personality began when she was a judge on “Iron Chef America” in 2013. Bertinelli committed to her new career in 2015, appearing on both “Valerie’s Home Cooking” and alongside “Ace of Cakes” baker Duff Goldman as host and judge on “Kids Baking Championship.”

In an interview earlier this year with “Closer Weekly,” she explained why she switched career paths. “I’ve been in front of the camera since I was 12,” Bertinelli said. However, she added, “I have been cooking longer than I have been acting. I was never quite comfortable acting. Now, I’m just able to be me and cook.” By 10, she had conquered making her mom’s lasagna and cherry cheesecake. “It was something I loved, hanging out in the kitchen and watching my mom.” Now, everyone is able to hang out with Bertinelli herself in her kitchen.