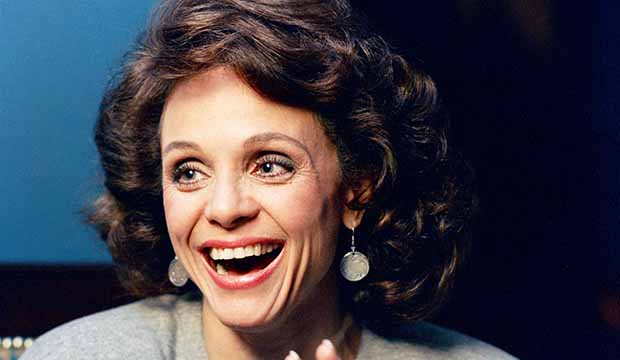 Losing Valerie Harper, who is dead on Friday at age 80, feels like losing a best friend. That’s because for a decade in the 1970s and continuously in reruns, Harper has been a best friend. She rose to fame first as Rhoda Morgernstern, Mary Richards’ upstairs neighbor and best friend on “The Mary Tyler Moore Show” and then continued the character in a spinoff series titled simply “Rhoda.” Rhoda’s wedding on the first season of that CBS comedy remains one of the most watched television programs in television history.

There was always something special about Rhoda/Valerie ever since she was first glimpsed washing the windows of Mary Tyler Moore‘s newly-rented apartment on the first “MTM” episode. While the character was initially thought too abrasive for TV audiences (the first test group hated her, so producers made changes), something clicked early on in the series and Rhoda became the buddy you always wanted. While Mary Richards seemed to move through life with ease, Rhoda always seemed to struggle to eke out a place for herself in the world. Mary lucked into a TV associate producer job without a bit of experience, made friends quickly and seemed to be greeted by the world with as the theme song said, with love being all around.

Rhoda on the other hand was never quite as lucky. Whether it be her constant battles with her mother (Nancy Walker) or her hard luck in the world of romance, life didn’t seem to open the same doors as sweetly for Rhoda as it did for Mary. That was the key though. Most people are greeted by life with the same difficulty as Rhoda. Harper herself often quoted an analysis of the three lead female characters of the show. Referencing herself, Mary and the overbearing and highly neurotic Phyllis Lindstrom (Cloris Leachman). To paraphrase: Mary is the person you want to be, Phyllis is the person you’re afraid you’ll become and Rhoda is the person you probably are. I’ll admit it. I’m a Rhoda.

Harper and the rest of “The Mary Tyler Moore Show” gang have been almost a constant backdrop for my life. I can remember being a preschooler laughing along with my family at episodes that I was much too young to understand. There was something about the joy the show evoked in adults that rubbed off on me even at that young age. My first year of college was filled with stressors much like Rhoda faced regarding life’s ups and downs. Reruns of the MTM series ran on a local channel, and as the days at my school became unbearable you could always rush to the dorm and see Rhoda fighting similar battles. It was all on the glorious black and white rabbit eared TV I had brought from home. (My dorm now has cable hookups I understand. Not so in my day.)

On a famous episode of “The Mary Tyler Moore Show” entitled “Put on a Happy Face” (for which Moore won an Emmy), life becomes kind of rotten for Mary. When she looks to Rhoda for comfort, she asks Rhoda have you ever had one of those days? Rhoda responds with the succinct one-word answer: “Mostly.”

But despite all the complaining and distress, Rhoda really had it pretty good. She had a dear friend in Mary, and she was a dear friend in return. Somehow that bond reached through to television audiences, and the many friendless people found in Rhoda and Mary the friends they missed in their own life. In the 1970s, it was said that “MTM” made it OK to stay home alone on a Saturday night and not feel bad.

Harper prevailed four times at the Emmy Awards (three for supporting and once as a lead) for playing Rhoda among her eight career bids. She earned six Golden Globe nominations, including a win for “Rhoda” in 1975.  She received a Tony nomination in 2010 playing Tallulah Bankhead in the Broadway play “Looped.” She even had an inspiring run on “Dancing with the Stars” in 2013 after she had been already diagnosed with fatal brain cancer.