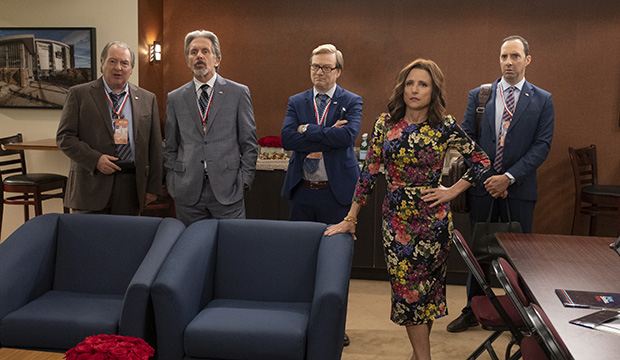 Unlike “Game of Thrones,” which could go out by tying the Best Drama Series Emmy record of four wins this year, “Veep” won’t have the chance to do so on the comedy side should it win a fourth statuette with its own final season. That would only good enough for the silver medal position, but it’d still be in pretty nice company.

“Veep,” which three-peated in Best Comedy Series from 2015-17 before skipping last year’s cycle, would join “All in the Family” and “Cheers” as four-time winners. The former three-peated from 1971-73 and took home a fourth statuette in 1978, while the latter triumphed in 1983, ’84, ’89 and ’91. “The Dick Van Dyke Show” could also count here because it won the category in 1963, ’64 and ’66, and it was one of four shows to share the single program prize in ’65, when the Emmys restructured the show into just four categories for program, acting, directing and writing.

The category record of five wins is, of course, held by “Frasier” and “Modern Family,” both of which won their quintet of Emmys consecutively, from 1994-98 and 2010-14, respectively. “Modern Family” blocked “Veep” from the win during the latter’s first three seasons.

SEE Size matters: ‘Game of Thrones,’ ‘Veep’ would combine for the fewest episodes to win drama and comedy series Emmys

“Veep” the overwhelming favorite in our predictions, with 5/1 odds. Reigning champ “The Marvelous Mrs. Maisel,” which dominated last year in the absence of “Veep,” is in second, followed by “Barry,” “The Kominsky Method,” “GLOW,” “The Good Place” and “Russian Doll.”