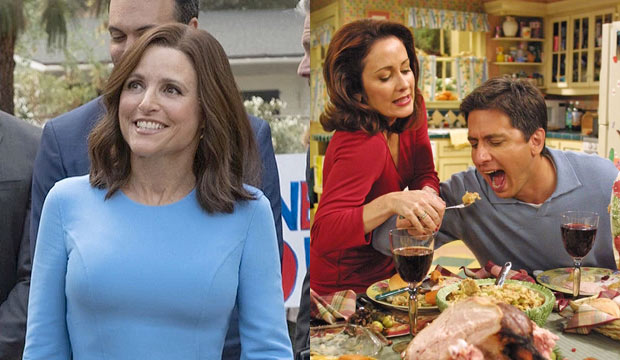 The final season of “Veep” (*sniff*) will begin airing Sunday, March 31 on HBO. Since this political satire won the Emmy for Best Comedy Series the last three times it was eligible (2015-17), it’s sure to be a force at the upcoming 2019 ceremony. If “Veep” prevails yet again, it’ll be the first time in 14 years that a show won Best Comedy Series for its final season, since “Everybody Loves Raymond” pulled off this rare feat in 2005. Prior to that, comedies like “The Dick Van Dyke Show” (1966), “The Mary Tyler Moore Show” (1977) and “Barney Miller” (1982) also took home the top prize for their final hurrahs.

Over the course of its first six seasons “Veep” has been nominated for 59 Emmys and won 17, including a record six in a row in Best Comedy Actress for Julia Louis-Dreyfus as one-time bumbling vice president Selina Meyer. Other major victories through the years came in Best Comedy Supporting Actor for Tony Hale as Selina’s bag man Gary (2013 and 2015) and Best Comedy Writing for original showrunner Armando Iannucci, plus Simon Blackwell and Tony Roche (2015).

SEE The ‘crazy, jam-packed’ final season of ‘Veep’ will premiere sooner than you think

In part because of Louis-Dreyfus’ real-life battle with cancer, the show did not air in 2018 and so it had to sit out of last year’s Emmy cycle. “Veep’s” absence led to major victories for first-year show “The Marvelous Mrs. Maisel” for Best Comedy Series and for Rachel Brosnahan in Best Comedy Actress. But now that “Veep” is back, our Emmy experts from major media outlets are predicting that it will triumph for a fourth time.

“Everybody Loves Raymond” was the final multi-camera show to win Best Comedy Series at the Emmys, with many TV fans believing it to be the last great sitcom. After initially prevailing in 2003, its final victory in 2005 was a big shocker indeed as it took down freshman ratings juggernaut “Desperate Housewives” as well as the previous year’s champion “Arrested Development.”

SEE No laughing matter: Experts are split between ‘Veep’ and ‘The Marvelous Mrs. Maisel’ in Emmy comedy race

“Veep” isn’t the only long-running comedy series bidding adieu this year. Others include “The Big Bang Theory,” “Crazy Ex Girlfriend,” “Unbreakable Kimmy Schmidt,” “One Day at a Time” and (presumably) “Arrested Development.” However, “Veep” is the likeliest to win according to our racetrack odds.

MAKE YOUR PREDICTION: Who'll win Emmy for Best Comedy Series?
To save your prediction, you must log in to Gold Derby. Click here to sign in with existing account -- or create a new one.