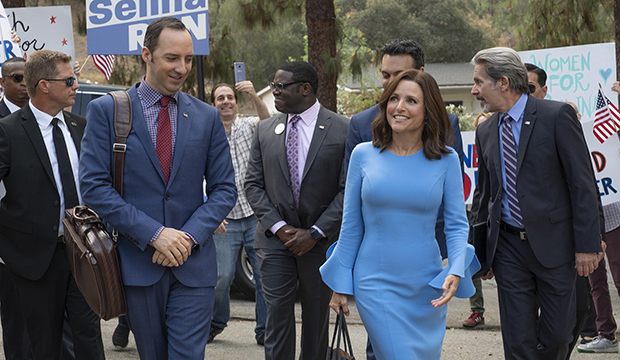 The seventh and final season of “Veep” will premiere Sunday, March 31 at 10:30/9:30c, HBO announced Friday at the Television Critics Association press tour. That means the three-time Best Comedy Series Emmy champ will indeed be back for this year’s ceremony after sitting out 2018.

This will be the first time “Veep” will not premiere in mid-to-late April (though you can argue that March 31 is close enough). The final season consists of seven episodes — its shortest ever and just one more than the Emmy-eligible minimum of six. Outside of the eight-episode first season, every subsequent season of “Veep” had consisted of 10 episodes. But showrunner and executive producer David Mandel believes that fewer is more in this case.

“We reached a very natural point storytelling-wise,” Mandel said Friday during the show’s panel. “We looked at each other and kind of went, ‘I think that’s the end. That’s right.’ I can only tell you they’re crazy, jam-packed episodes. I think you’ll find there’s more than 10 episodes worth of material jammed into them.”

SEE The 25 greatest ‘Veep’ episodes, ranked from worst to best

Mandel added that he knew “where the show was going to end,” and it then became a matter determining how long it would take to tell it. “We were given a wonderful chance by HBO to explore and figure out if it meant two years or two years and a movie or whatever it was going to be,” he said.

Louis-Dreyfus, who joined the panel via satellite from Austria, shared that she is “very happy” with how “Veep” concludes, but was tight-lipped about where Selina Meyer ends up. “I’m not going to say that Selina evolves except to say that she’s as true to herself as she can possibly be by the time this season ends,” Louis-Dreyfus said. “But I’m not sure that evolution is her game.”