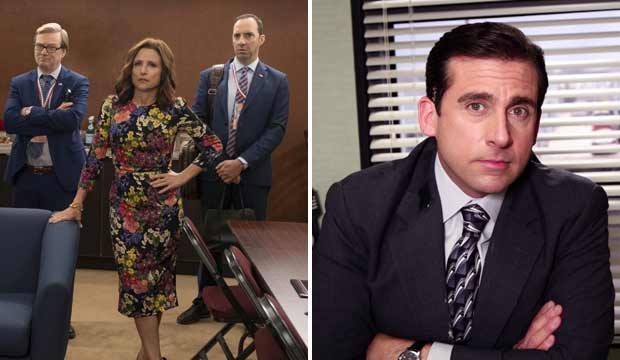 Have you voted for the 2019 Gold Derby TV Awards yet? You could help make history — or prevent it, depending on your preference. “Veep” won Best Comedy Series from our users in 2016 and 2017. If it wins again this year for its final season that would tie the all-time record with “The Office,” which we also honored three times in the top category (2006, 2007, 2009). If you haven’t registered already, do it here. Then visit our predictions center here to cast your votes. You can keep editing your ballot as often as you like until voting closes on July 21.

We established the Gold Derby TV Awards in 2004, and since then we’ve spread the wealth. No show has dominated for five years like “Frasier” and “Modern Family” have done at the Emmys. “Arrested Development” won twice right out of the gate (2004-2005). And so did “Modern Family” (2010-2011). “Parks and Recreation” followed with dual wins (2013, 2015), and most recently “Veep” doubled up. Over those 15 years only “The Office” won three times (not counting the Decade Award “Arrested Development” won in 2009).

So as you can see, Gold Derby’s users aren’t set in their ways. But “Veep” is on a roll, winning top honors the last two times it competed. It didn’t air during the 2017-2018 TV season, so it wasn’t eligible last year, but the show that won in its place, “Atlanta,” is ineligible this year, so it won’t be able to stand in “Veep’s” way. However, every other Best Comedy nominee from 2018 is eligible to return: “Barry,” “GLOW,” “The Good Place,” “The Marvelous Mrs. Maisel,” “Unbreakable Kimmy Schmidt” and “Will and Grace,” not to mention potential first-time nominees like “Dead to Me,” “The Kominsky Method,” “The Other Two” and “Russian Doll,” among others.

It’s up to you: do you think “Veep” deserves another win, or do you think it’s had enough? Wherever you stand, your votes make all the difference at our kudos, so make sure to support your personal favorites. More than 1,000 savvy Derbyites already have. See more detailed voting instructions here.