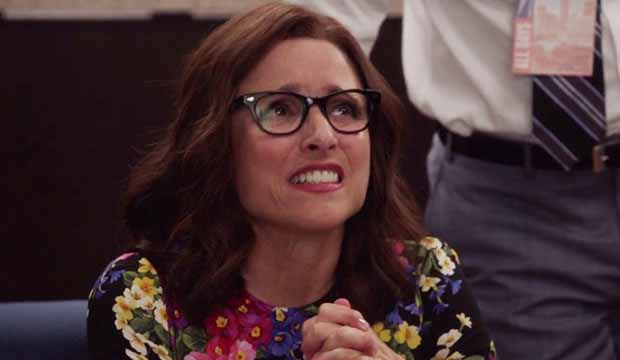 After taking a year off, HBO’s three-time Best Comedy Series champ “Veep” returned to the Emmy race for a chance at snagging a fourth victory for its farewell season. Gold Derby recently spoke with several of the show’s contenders, including stars Julia Louis-Dreyfus, Tony Hale and Peter MacNichol, showrunner David Mandel and art directors Kimberly Wannop and David Smith, as well as actors Reid Scott and Timothy Simons. Scroll down and click on any name below to be taken to their full interview.

The role of Selina Meyer, a calculating politician who claws her way into the presidency, has helped Louis-Dreyfus break several Emmy records. Not only do her six consecutive Best Comedy Actress victories make Meyer the most rewarded character of all time, but combined with her wins for “Seinfeld” and “The New Adventures of Old Christine,” they tie Louis-Dreyfus with Cloris Leachman for the most awarded performer of all time with eight each. Add to that her three Best Comedy Series prizes for the show, and she’s got 11 trophies on her shelf, with room for more. All of this amounted to “the ride of a lifetime,” she declares. But awards glory aside, “the hardest part about saying goodbye to ‘Veep’ has been saying goodbye to all of these people who I adore.”

SEE ‘Seinfeld’: 30 greatest episodes for 30th anniversary, ranked worst to best, including ‘The Soup Nazi,’ ‘The Contest,’ ‘The Rye’

One of those great people she said goodbye to was Hale, who returned to the Best Comedy Supporting Actor race for playing Selina’s devoted assistant, Gary. It’s his sixth nomination in the category for the series, which brought him victories in 2013 and 2015. “The last episode and last day we just needed to help each other keep it together,” he divulges. “We were such a family. The last scene for each character, everyone would gather around the monitor to hug, laugh and cry.  It was one big emotional roller-coaster.”

Certainly Mandel, who took over as showrunner in 2016 after the departure of creator Armando Iannuci, felt the pressure to deliver, particularly in the series finale. “I wanted to give Selena the ending she deserved,” he reveals. “But it took me a second to figure out what that would be.” His hard work paid off with farewell Emmy bids in Best Comedy Series and Best Comedy Writing for that brain-wracking last episode. In addition to his series victories in 2016 and 2017, Mandel has earned four additional bids for the show: two in writing, two in directing. He’s also competed once as a writer on “Saturday Night Live” and as a producer on “Seinfeld” (twice), “Curb Your Enthusiasm” (three times) and “The Simpsons” (once).

Among the Creative Arts contenders, we spoke with MacNichol, who competed in Best Comedy Guest Actor for playing acid-tongued political strategist Jeff Kane. MacNichol, who famously had his 2016 bid rescinded due to a technicality, previously won the Best Comedy Supporting Actor prize for “Ally McBeal” in 2001, contending again for that series in 2000 and 1999. “Obviously it’s an honor” to be in contention, he says, especially considering the comedy guest acting race “may be about the hardest category there is.”

Additionally, we spoke with Scott about playing Washington power player Dan Egan and Simons about his role as incompetent presidential candidate Jonah Ryan.