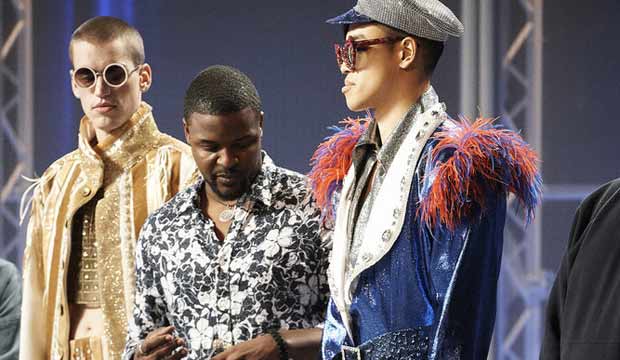 “Project Runway” started with 16 designers, and it’s down to 7, so it’s getting harder and harder for the judges to decide who should go home. Everyone who is still in the competition has impressed the judges repeatedly over the course of the season, but there’s just one who still hasn’t won a single design challenge: Venny Etienne. There may be a target on his back unless he steps it up effective immediately because they’re culling the herd and he stands out in the worst way. You can make your predictions for this week’s show right here in our predictions center.

Venny started the season with a high score in the “First Impressions” challenge, and he remained consistent for several weeks thereafter, but things have been rough for him in the last four episodes. He landed in the bottom two three times. He was almost eliminated with a bad, feathery choir robe look in “Power Play.” Then he came close to winning “Elegance is the New Black” with a simple, sophisticated pink dress. But it was right back to the bottom two in the “Blame it on Rio” team challenge, where the judges unexpectedly sent home Renee Hill instead of him. And he was in the bottom two again in “The Stitch is Back,” where his Elton John look went awry.

However, the judges keep giving him second chances. At this point he’s on his fourth second try. How many times are they going to look the other way? I have a feeling he’s just one low score away from elimination, so it’s do or die for him this week. He has proven that he’s capable of making a comeback on the runway, but his wildly inconsistent results (three high scores, three low scores, three safe scores) mean it’s a complete mystery as to which Venny will show up on any given day. If he doesn’t put his best foot forward soon, the judges are bound to finally show him the door.