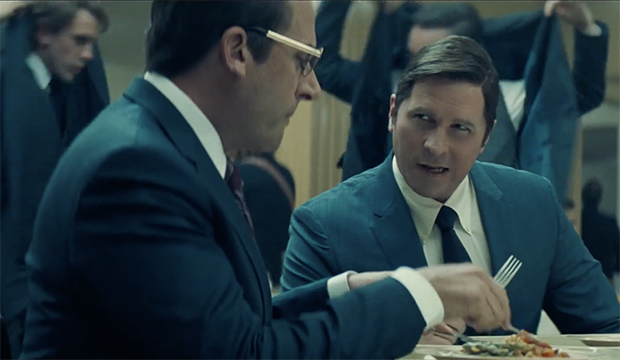 During the “Vice” press tour, the cast and crew revealed that the was a musical number that was cut from the eventual eight-time Oscar nominee. Now you can finally see it, and well, it was the right call to cut it.

Thanks to our sister site Rolling Stone, you can watch the ditty below, which will also be an extra on the DVD and Blu-Ray releases for the film, out April 2 (it’s out on digital on Tuesday). The number, which runs two minutes and 20 seconds, features vocals from Alabama Shakes‘ Brittany Howard and was from the sequence early in the film when Donald Rumsfeld (Steve Carell) shows Dick Cheney (Christian Bale) the D.C. ropes. As Rumsfeld shares his pearls of wisdom about climbing the ladder and leaking things to the press over lunch, Howard and other D.C. staffers break out into song and dance. It was choreographed by Andy Blankenbuehler of “Hamilton.”

So if you were expecting Carell or Bale to sing and dance, you’ll be sorely disappointed. (Honestly, this was a missed opportunity for Bale to show off his chops again.)

The number is amusing in that “what the actual f—?” kind of way, which was probably what Adam McKay was going for in the scattershot political dark comedy. But unlike the Shakespeare scene, which was well written and acted by Bale and Amy Adams, this just feels indulgent and doesn’t really add anything — Howard is just echoing what Carell is saying — and the song is not good or catchy enough to get away with it.

McKay described the sequence as “breathtaking” and “incredible” to our sister site Variety in December, but admitted that “it just didn’t work.” In a New York Times profile in November, McKay revealed that Paul Thomas Anderson convinced him to drop the number, along with the film’s original opening covering Cheney’s adolescence, after he showed him an early cut, so we have PTA to thank for that.