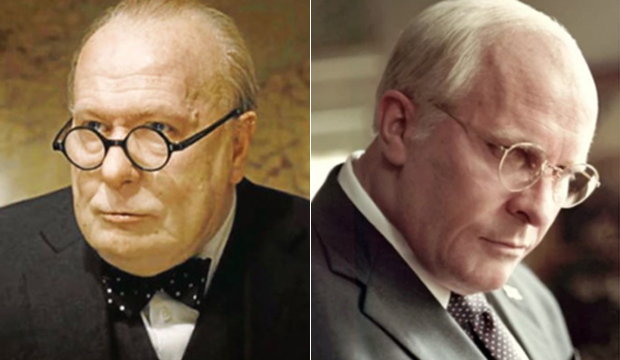 In “Darkest Hour,” Gary Oldman embodied the British statesman. He won Best Actor pretty much everywhere, including at the Academy Awards. In “Vice,” his  “Dark Knight” co-star Christian Bale is the essence of the American vice president: a scarier figure altogether, like a looming great white shark. Unlike Oldman, Bale didn’t start off the awards season as the favorite in the Oscar race. However, his wins at the Golden Globes and Critics’ Choice Awards have turned him into the Best Actor frontrunner.

Both actors credit their respective hair and make-up teams for transforming them into their characters. The legendary Kazuhiro Tsuji, who Oldman coaxed out of retirement to do “Darkest Hour”, won an Oscar (alongside David Malinowski and Lucy Sibbick) for his efforts.

The “Vice” crew just won Best Makeup and Hairstyling at the Critics’ Choice Awards, which “Darkest Hour” also won. And it is up for that same award at the BAFTAs, where “Darkest Hour” likewise prevailed.

The closest Oscar rival in the Best Makeup and Hairstyling race, “Black Panther,” is up for just special makeup effects. Our third-place Oscar contender “Mary Queen of Scots” vies for both period/character makeup and hairstyling.