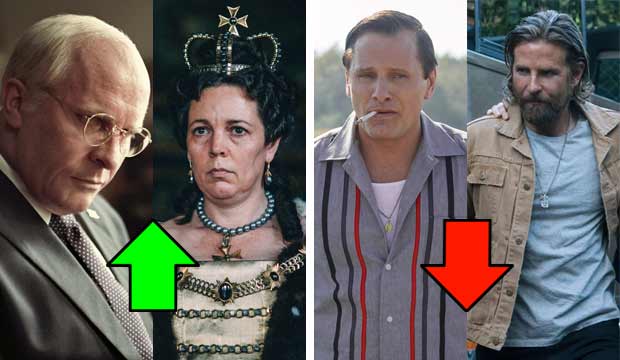 Where does the race for Best Picture stand now that the 2019 Oscar nominations have been announced? (Check out the full list here.) “The Favourite” and “Roma” lead with 10 bids apiece, but it’s not important just to have the most nominations. You also need to have the right nominations. So which films scored bids in the races that most strongly correlate to winning the top prize? Which films got more support than we expected? And which didn’t do as well as we thought they would? Let’s get the lay of the land.

“The Favourite” — The historical comedy was the most nominated film at the Critics’ Choice and BAFTA Awards given its showcase performances and historical production values, so it wasn’t too surprising that it also topped the Oscars’ list. But what’s crucial for the film is that it managed nominations in four key fields. It’s up for acting (Olivia Colman, Emma Stone and Rachel Weisz), directing (Yorgos Lanthimos), writing and film editing. It’s rare to win without nominations in those areas. Only two other films this year showed up in all of those categories — more on those below.

“Roma” — Alfonso Cuaron‘s film wasn’t nominated for Best Film Editing, which hurts it — the only film in the last three decades to win Best Picture without that nom was “Birdman” (2014). But it so drastically over-performed elsewhere relative to our expectations that it has to be considered a threat to win Best Picture. It earned bids for Best Actress (Yalitza Aparicio, who we thought was on the bubble), Best Supporting Actress (Marina de Tavira, who came out of nowhere) and even both sound categories. The fact that such an intimate, character-driven drama (from Netflix!) earned a field-leading 10 nominations alongside a lavish period movie speaks volumes.

“Vice” — Some critics loved this movie about Vice President Dick Cheney, and some hated it, so where the academy would land was an open question. It turns out they loved it. It received eight nominations, including expected bids for Best Actor (Christian Bale) and Best Supporting Actress (Amy Adams), plus more surprising bids for Best Director (Adam McKay) and Best Supporting Actor (Sam Rockwell). Like “The Favourite” it’s also nominated in the crucial fields of writing and film editing. However, when Oscar voters pick the winner for Best Picture, they’ll be ranking the nominees in order of preference. That’s where this film’s divisive nature could hurt it.

“Black Panther” — It made history as the first comic book superhero movie nominated for Best Picture, but other evidence indicates that the motion picture academy wasn’t that into it. It’s not up for directing, writing, film editing or acting. It even under-performed in craft categories, where it was snubbed for Best Visual Effects, a race we thought it might win. Seven total nominations is pretty damn good, but it didn’t even match the total for “The Dark Knight” (2008), which had eight noms even though it was notoriously snubbed for Best Picture.

“Green Book” — It’s been a tumultuous few days for this period dramedy about a road trip through the Jim Crow South. It won the Producers Guild Award for Best Picture over the weekend, which suggested it was potentially the Oscar front-runner, but then Peter Farrelly was left out of the Best Director race this morning. It did show up in other categories like Best Actor (Viggo Mortensen), Best Supporting Actor (Mahershala Ali), Best Original Screenplay and Best Film Editing — the last of which was a surprise. But missing out on that crucial directing nom means Best Picture will be a steep hill to climb.

“A Star is Born” — Ditto. This film looked like the Oscar front-runner earlier this season, and it’s tied with “Vice” with eight nominations, so it seems like it would be time to celebrate for the musical romance. But while Bradley Cooper was nominated for Best Picture, Best Actor and Best Adapted Screenplay, the academy left him out of the Best Director lineup, and the film isn’t up for Best Film Editing either. Can it overcome those deficits?

SEEAmy Adams Oscar nominations: All 6 bids from ‘Junebug’ to ‘Vice’

“BlacKkKlansman” — This film is holding steady in the Best Picture race. Along with “The Favourite” and “Vice” it’s one of only three films nominated for acting, writing, directing and film editing. That keeps it right in the thick of it for a Best Picture win. But lead actor John David Washington wasn’t nominated, which is cause for concern. Still, the fact that it’s nominated for six awards and that Spike Lee is nominated for Best Picture and Best Director for the first time in his career gives the film the kind of rooting factor we mustn’t underestimate.