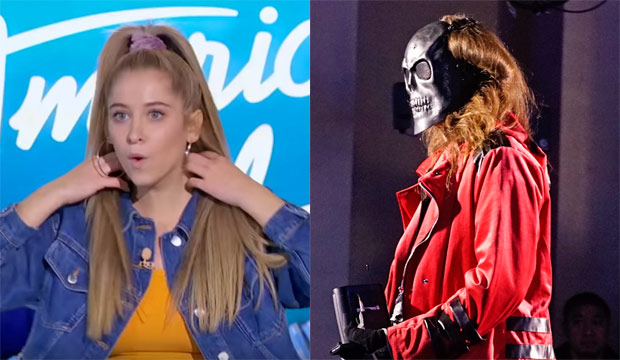 You can’t make this stuff up. During Sunday’s Season 17 premiere of “American Idol,” viewers were introduced to four of the wackiest singers in the reality TV show’s history. From the burping girl to the mystic death creature vocalist, it seemed as though producers threw everything at the wall in the first episode hoping that something would stick. Well, these four stuck. Scroll down to see our take on four of the wackiest singers from the “American Idol” season premiere, then vote in our poll for which one is YOUR favorite.

1. Burping girl, aka Margie Mays
Margie’s claim to fame was that she burped when she’s nervous. But that was just the beginning of her wackiness as she also mimicked bird noises, made invisible boxes over her head and panted around the stage during her audition. In the end, the judges appreciated how Margie’s quirky attitude disappeared when she sang and encouraged her to “just be herself.” The result? Margie advanced to Hollywood with two “yes” votes (Katy Perry and Luke Bryan) and one “no” vote (Lionel Richie).

2. Mystic death creature vocalist, aka VoKillz
With a wink to rival reality show “The Masked Singer,” VoKillz stepped into his audition wearing a death mask and holding out a tiny bag that the judges believed was containing a dead creature (it was a necklace). In truth, VoKillz was actually a really nice guy, however his death metal screeching was way too much for the judges and they hid behind the desk waiting for him to finish. It’s crazy that almost 10 minutes of screen time was devoted to this guy. The result? Luke and Lionel voted “no,” while Katy told him “yes” because she didn’t want him to murder her.

3. Lying rapper, aka Nick Rogers
This Colorado high school student began by sweetly serenading Katy, then after 30 seconds he went into a free-styling rap that really impressed the judges. The wackiness came after his audition when he said that his musical influences were Kendrick Lamar, Kanye West and … Lionel Richie. As Lionel started celebrating, Katy asked Nick to name one of Lionel’s songs. Nick froze like a deer in the headlines, then confessed, “I don’t know a Lionel Richie song.” Liar, liar, pants on fire! The result? Nick advanced to Hollywood with three “yes” votes.

4. Church pop singer, aka Uche
Uche, a 24-year-old church singer, wanted to mix things up by singing pop songs. He started by taking on Christina Aguilera‘s “Ain’t No Other Man” while dancing wildly around the audition room until he lost his breath. Katy noticed something that the others didn’t, so she asked Uche to stand in place and sing something more emotional. That’s when he went back to his church roots with Smokie Norful‘s “God Is Able.” The result? Uche advanced to Hollywood as all three judges voted “yes” — that is, after Lionel decided to retract his initial “no” vote.