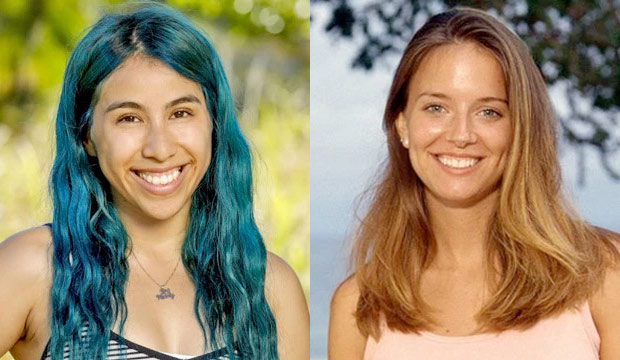 During Wednesday’s tribe swap episode of “Survivor: Edge of Extinction,” the seemingly impossible happened when 15 people grabbed new buffs at random and 14 of them ended up with their old tribe mates. Wendy Diaz was the only person to find herself at a camp full of fresh faces. While Wendy chose to look at this as a positive, there’s no denying the fact that strategically she was now on thin ice. The good news for Wendy is that the same thing happened to Amber Brkich 30 seasons ago on “Survivor: All Stars” … and she won.

After the dust settled on the season’s first tribe swap, Wendy found herself at her old Manu camp along with four old Kama players: Aubry Bracco, Victoria Baamonde, Gavin Whitson and Eric Hafemann. Host Jeff Probst blatantly told Wendy, “If ‘Survivor’ is a game of numbers and these four are tight, you would be in trouble.”

Wendy’s chippy reply? “Yeah, I would be in trouble, but all of these people look very athletic so I don’t think we’re gonna lose challenges.” Wendy’s wish came true in Episode 4, as Manu won immunity (along with Kama), which sent Lesu to tribal council. The preview trailer for next week suggests that Wendy, Aubry and Victoria may come together to blindside Eric, so might Wendy actually be in a safe position for the time being?

As for Amber, back in Season 8 the 10 remaining cast members experienced a tribe swap that resulted in Amber being the only person to end up with new players. She was a Chapera tribe member both before and after the swap, and she found herself hosting four old Mogo Mogo tribe members at her existing camp: Jerri Manthey, Lex van den Berghe, Kathy Vavrick-O’Brien and Shii Ann Huang.

When Chapera lost the post-swap immunity challenge, Amber’s name was obviously being thrown out there, but Lex decided to save Amber because of a promise he made to her showmance partner Boston Rob Mariano. Jerri ended up going home that night instead, and then the two tribes merged together the very next day.

In classic “Godfather” fashion, Boston Rob soon “thanked” Lex for saving his girl by promptly voting him out, which created an epic feud that’s still talked about today. When the merge hit Amber was never again a target and she wound up winning the $1 million check by a 4-3 vote over Rob. In other words, don’t give up, Wendy — if Amber could overcome her tribe swap, so can you!