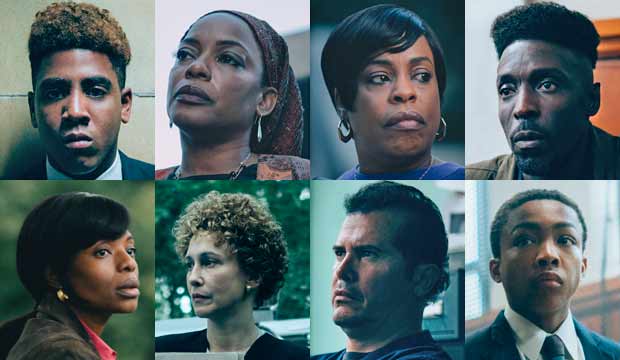 We expected “When They See Us” to do well in the Emmy nominations, but we had no idea it would do this well. Telling the true story of the five boys wrongly convicted of a brutal rape in New York City, it earned 16 nominations overall, including Best Limited Series, Best Movie/Mini Writing (Ava DuVernay and Michael Starrbury) and Best Movie/Mini Directing (DuVernay). But where it really walloped us was in the acting categories, where it received eight bids. That’s the second most acting nominations ever for a limited series.

After that two shows racked up eight nominations each, just like “When They See Us.” “Holocaust” (1978) and “Angels in America” (2004). However, “Holocaust” also split its acting bids between continuing performance (seven) and single performance (one). “Angels in America” is the only program besides “When They See Us” to earn this many nominations with the acting categories configured as they are now: Best Movie/Mini Actor (winner Al Pacino), Best Movie/Mini Actress (Emma Thompson and winner Meryl Streep), Best Movie/Mini Supporting Actor (Justin Kirk, Ben Shenkman, Patrick Wilson and winner Jeffrey Wright) and Best Movie/Mini Supporting Actress (winner Mary-Louise Parker).

SEEAge is just a number: ‘When They See Us’ star Jharrel Jerome aiming to be first man in his 20s to win his Emmy category

It’s not the most nominated limited series of the year, though. “Chernobyl” holds that distinction with 19 bids; that HBO fact-based drama, about a very different tragedy in the 1980s, only got three acting nominations, but it made up for that across craft categories. Even still, the massive over-performance of “When They See Us” in the acting categories might still make it the front-runner. The only program ever to lose Best Limited Series with eight or more acting bids was “Rich Man,” but again, its acting total was skewed by how very many categories it competed in. “Roots” and “Angels in America” both competed in only four acting categories, and not only did they win Best Limited Series, they were downright undeniable.