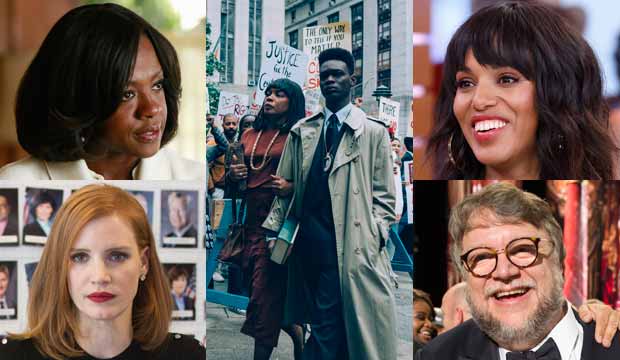 Critics love “When They See Us.” The Netflix limited series premiered to rave reviews when it dropped on Friday, May 31. But its Emmy hopes will be determined by industry esteem: these awards are voted on by television insiders including actors, directors, writers and more., and critics don’t get a say. The good news for the true-crime drama is that, based anecdotally on social media responses, the praise from writer-director Ava Duvernay‘s peers seems strong. Scroll down for a sampling of tweets from high-profile stars who have been banging the drum for the series.

“When They See Us” tells the true story of the five teenagers who were arrested in 1989 for the rape of a jogger in Central Park. Questioned for hours without representation, they were coerced into false confessions, brought to trial and convicted. They weren’t exonerated until 2002, after which they sued New York City, which finally settled in 2014 and paid the wrongly incarcerated men $41 million.

The premiere date for the series was also the very last day to qualify for this year’s Emmys, which can be a double-edged sword. It will be fresh in mind when voters start marking their ballots on June 10, but will enough of them have seen it by then? The nearly five-hour series pulls no punches in its depiction of the torturous treatment the young men received from when they were aged 14 to 16 until they were adults facing the inescapable stigma of being convicted sex offenders. It’s not “feel-good” viewing by any means, so getting industry members to set aside time for it might have been a challenge.

But Netflix is supporting it with a prime spot during their Emmy FYSEE program with DuVernay, executive producer Oprah Winfrey and the real men the series is based on. And it’s getting raves from a wide array of celebrities, including Oscar and Emmy winner Viola Davis, who calls it a “must-see,” Oscar and Emmy winner Guillermo Del Toro, who says, “Ava is here to stay — and to wield truth and power.” Emmy nominee Kerry Washington thinks it’s a “heartbreakingly necessary work of brilliance.” And Oscar nominee Jessica Chastain says, “This is what I’ve been waiting for. Thank you for sharing your light.” A wide range of stars including Janelle Monae, Ella Mai, Meek Mill, Ken Burns and LeVar Burton have also joined the chorus, all in just the first few days of its release.

SEE‘When They See Us’ reviews: Netflix limited series is ‘impassioned,’ ‘personal’ and ‘the most important TV event of the year’

Is “When They See Us” looking good for Emmy nominations, and perhaps Emmy wins? Check out some of the glowing comments below, and make or update your Emmy predictions here.

This is what I’ve been waiting for. Thank you for shining your light on #WhenTheySeeUs @ava https://t.co/5FBEl0jri2

“When They See Us” on @Netflix is a must see! Special thank you to my sistah @Ava for bringing this story to life! ❤️ pic.twitter.com/9d0rPJ0utb

Ava is here to stay- and to wield truth and power. https://t.co/2lnXjAL4e5

I had to keep breathing. Episode #1 nearly broke my heart, however I’ll keep watching. This is essential viewing for EVERY American! As essential to your understanding of America as was, ROOTS! #bydhttmwfi
Bravo @ava @WhenTheySeeUs pic.twitter.com/jwNOjpq3Qb

My dear @ava 🙏🏾 #WhenTheySeeUs is a heart breakingly necessary work of brilliance.

i really just want to commend everyone that played any type of part in the making of @WhenTheySeeUs .. this story is so important. you all SMASHED it! 🗣

“When they see us” is super emotional if you been thru the system! Thank you Ava and all the creators of this series!

Thank you @ava for sharing this important story ! I couldn’t be more proud ! #WhenTheySeeUs is now streaming on @netflix pic.twitter.com/5RCB2CaNUb

MAKE YOUR PREDICTION: Who'll win Emmy for Best Limited Series?
To save your prediction, you must log in to Gold Derby. Click here to sign in with existing account -- or create a new one.
PREDICTthe Emmys now; change them until July 16