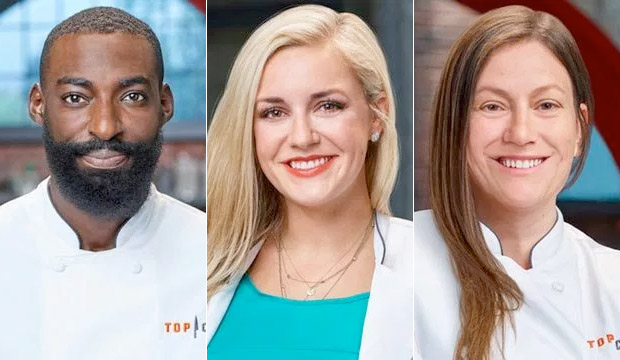 On Wednesday, March 14 the three remaining chefs of the Kentucky-based 16th season will cook it out to claim the title of “Top Chef.” Padma Lakshmi has already warned us that only two of the finalists will actually compete for the win, but as of now all three are still in Macau and ready to whip up the best meal of their lives. Will it be West African cuisine specialist Eric Adjepong from Washington, DC, Southern cooking star Kelsey Barnard Clark, or the Kentucky hometown hero Sara Bradley?

Below we break down the highs and lows that each chef experienced over the course of the season, analyzing what their strengths are heading in to the finale. Read what we have to say, leave your own comments down below and be sure to vote in our poll of who SHOULD win season 16 “Top Chef: Kentucky.”

In terms of win record, Eric is out in front with three individual wins in Elimination Challenges (episodes 6, 10 and 11). His oyster with rum/bourbon mignonette, grenadine nage floater & pumpernickel came out in top during the Prohibition-era cocktail-inspired Roaring Twenties challenge and he came out on top again with a tamarind glazed drumette with herb confetti during the head-to-head team cook off in front of a basketball crowd in Rupp Arena at the University of Kentucky. But his strength all season has been for his ability to bring his love for and knowledge of (seriously, he went to Africa to do a thesis on this stuff) West African cuisine. He showcased those flavors best during the Muhammad Ali-themed challenge with his “Rumble in the Jungle” fufu plantain & cassava dumpling with Congolese red sauce dish.

What isn’t working in Eric’s favor is that his only two times being on the bottom end of challenges was in the last two weeks (episodes 13 and 14), both of which were in China where he was tasked with incorporating Macanese flavors and ingredients into his own style. So I guess he’s on a bit of a down slide? But then again when you’re down to only 5 and 4 chefs, respectively, then someone has to be in the bottom and it’s only fair that Eric visited that spot at least once in the competition, right?

Kelsey has been a solid performer all season long, showcasing her vast experience in Southern cooking and reinterpreting those well known dishes to fit specific challenge expectations. She scored her two Elimination Challenge wins in episode 8 with oysters & pickled watermelon rind at the houseboat party on Lake Cumberland and in episode 13 with a mushroom broth with Portuguese sausage and veggies at the Chinese New Year party in Macau to celebrate the Year of the Pig. She’s shown a real strength in adaptation, especially since arriving in Macau where she’s been able to blend the worlds of Chinese and Southern cuisines smartly in both conception and execution.

Kelsey’s vulnerability in the competition, especially for claiming the win, is that while she can adapt what she knows within the competition the scope of her cooking seems otherwise limited to her Southern foundation. I take that as a negative aspect only because it doesn’t inspire a lot of excitement for a competitive cooking show when Southern cooking is so well-known by the masses now. Ultimately I question whether the judges see a potential in Kelsey to bring something new to the table, so to speak.

Like Kelsey, Sara’s expertise is in traditional American cuisine, but with a more down to earth and home-grown feel to it. As a native Kentuckian in a Kentucky-based season, Sara has had a heavy burden on her shoulders to represent for her home state, and that might be why it took her a while to find her groove. Sara didn’t notch her two Elimination Challenge wins until episodes 12 and 14. She first won in the final Kentucky challenge with an olive oil poached sea bass and Iberico ham broth in a dish honoring her culinary mentor and then two challenges later in Macau with a matzo ball soup using Macanese ingredients inspired by her Jewish heritage. Sara’s best cooking is when it comes from the heart, grounded in what she grew up eating and with ingredients she’s used to working with.

Because Sara bloomed so late, there was a lot of opportunities where she may have gone home. Indeed, Sara scored within the bottom tier of dishes five times this season–far more than either Eric or Kelsey and a lead for any chef in the competition. That being said, she was the only finalist here that ever won a Quickfire Challenge (in episode 11 with fried chicken and corn and blackberry salad).