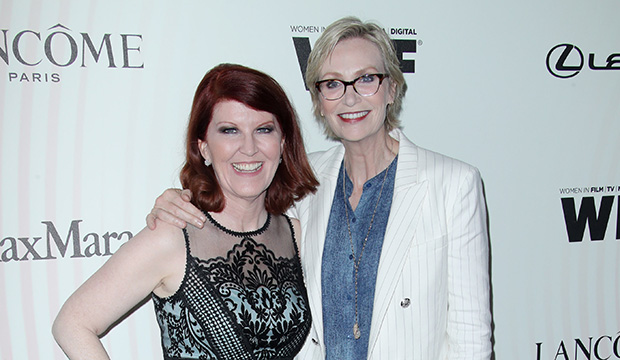 Jane Lynch‘s close pal Kate Flannery had so much fun on “Dancing with the Stars” that she’s now going on the tour, but you won’t ever find the “Glee” alum anywhere near the hardwood.

“It was great for her. It’s not great for Jane,” Lynch told “Entertainment Tonight.” “It’s the dancing! Maybe ‘Skating with the Stars’...”

Hey, we’ve already had one-season duds “Skating with Celebrities” and “Skating with the Stars” (remember them?). Maybe the third time’s the charm? We are in the age of reboots and revivals after all.

SEE Hardly shocking, but ‘Dancing with the Stars’ won’t return in spring 2020

To hear the “Marvelous Mrs. Maisel” star tell it, she’s completely hopeless on the dance floor and “can’t be shown how to dance.” Flannery, who finished in seventh place with Pasha Pashkov on Season 28, has also tried to talk the actress into it to no avail. “If someone says, ‘Step, ball, change’ … I’m gone! It’s not for me,” Lynch explained. Sure, but that didn’t stop certain people with two left feet from going pretty far the past two seasons.

Even if “Dancing” does approach Lynch to join the show, she won’t have to worry about turning it down for a while since the series is on hiatus during the spring for the second year in a row and will likely return next fall for its 29th installment, though ABC has yet to officially renew it.