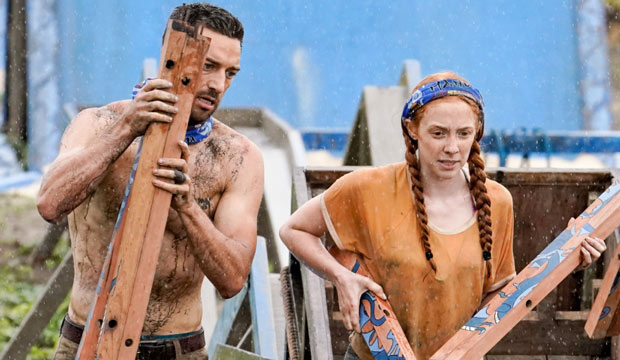 According to Gold Derby’s exclusive predictions, don’t look for any of the returning players — David Wright, Kelley Wentworth, Joe Anglim or Aubry Bracco — to be named the winner of “Survivor: Edge of Extinction.” Instead, our readers give newbies Eric Hafemann and Victoria Baamonde the best odds to win this landmark 38th season. Do you agree or disagree with those predictions? Hurry and make your own picks before the highly anticipated merge episode airs Wednesday night on CBS. It’s fun and easy, so get started now!

Eric, a 34-year-old firefighter from California, currently leads with 5/1 odds while Victoria, a 23-year-old waitress from New York, is right behind him with 11/2 odds. These two original Kama members have remained close throughout the entire game, including in last week’s two-hour episode when they hatched a plan to convince Aubry that she was safe. Aubry ended up going into tribal council with two advantages in her pocket (an immunity idol and an extra vote), where she foolishly was the only person who voted for Wendy Diaz. Now at Extinction Island, Aubry has a chance to return to the game along with the rest of the deserted island inhabitants.

The best thing that Eric and Victoria have going for them is numbers. The season began with 14 brand new players competing against four returnees. With the merge swiftly approaching, the newbies now number nine, a vast majority over the three remaining veterans. Eric and Victoria’s closest allies may be their original Kama friends Julia Carter, Ron Clark, Julie Rosenberg and Gavin Whitson. That’s a strong six-person group with a nice mix of physical strength and social ability, so if they decide to all stick together they could become the season’s most dominant alliance.

While TV audiences haven’t seen much of Eric on camera, fans of the deleted scenes know that Eric prides himself on being a provider. Early in the season he caught six fish for his tribe after they won the reward challenge. He later remarked, “Maybe there will be a vote down the road that’s so close that [fishing] is the little thing that tips me over to safety. Who knows?” As for Victoria, she’s shown herself to be a savvy player who effortlessly took Aubry under her wing and then had no qualms about lying right to her face. Is she the new Parvati Shallow, who won “Survivor: Micronesia”?