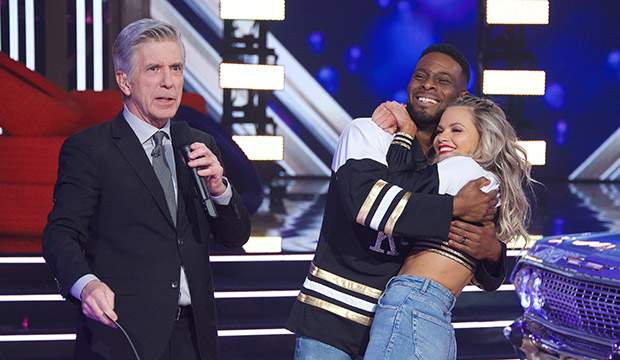 For the second season in a row, Witney Carson came up just short on “Dancing with the Stars,” finishing in second place last week with Kel Mitchell. While she’s cool with the placement, the pro acknowledges that she wanted to win (duh) and isn’t that surprised they didn’t because of the structure of the show.

“I just kept thinking I’ve been here before, been here before and I really want that Mirrorball so bad,” Carson told PopCulture.com. “I’ve been so close to it so many times and it’s been a long time since I’ve actually won. Just to be there was obviously an honor, everybody was amazing, but of course you want to win. It’s a popularity contest and America chose who they wanted and it wasn’t us, unfortunately and that’s just something that you have to know. It’s fine. So we made it as far as we possibly could and I guess it was very, very close, so it’s all good!”

The pair, who had the second highest score on the finale — only getting dinged one point by Len Goodman for their hip-hop freestyle — lost to Hannah Brown and Alan Bersten, who also had Bachelor Nation backing them. Carson, of course, is no stranger to the power of a large fan base. Last year, she and Milo Manheim — and everyone else — were upset by Bobby Bones and Sharna Burgess, thanks to the radio host’s massive following pushing him over the line despite him being the weakest dancer left. (Brown, at the very least, is a far better dancer than Bones.)

And then there’s even worse dancers like Joe “Grocery Store Joe” Amabile last year and Sean Spicer this year making it far because of fan votes, which account for 50 percent of couples’ totals along with judges’ scores. On the flip side, as Ally Brooke proved this season with three appearances in the bottom two and an ultimate third-place finish, high judges’ scores can only do so much if people are also not voting for you.

Still, Carson, who won Season 19 with Alfonso Ribeiro in 2014, is “happy” with everything she and Mitchell accomplished this season. Reiterating his comments after the finale, she feels they “had already won because of the routines that we did and the growth that he’d shown.”

“He learned very quickly and he was able to correct everything that I was giving him. That’s why I feel like he was the most improved,” Carson added. “He was a great teammate. He constantly was calming me down in the chaos, which is so funny because I feel like a pretty level-headed person. But there were times in the season where I would get really stressed and he would just calm us down and he was super great about that.”