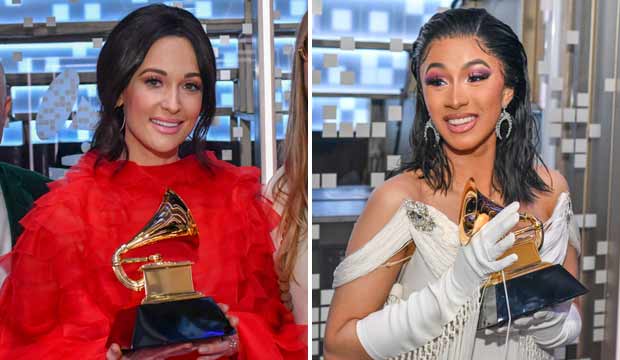 The Grammys have spent the last year in damage control after controversies surrounding the lack of diversity in their awards and their treatment of women among their nominees and performers. So how did they do in 2019? As Best New Artist winner Dua Lipa pointedly said in her acceptance speech, “I guess this year we’ve really stepped up.”

Dua Lipa’s comment was in reference to Grammy president Neil Portnow, who put himself in especially hot water last year when questioned about women in the industry. He said that women should “step up” if they want more recognition. Backlash to that comment was part of what prompted the recording academy to establish a diversity task force. But this year women made history.

SEEGrammys 2019 live blog: Kacey Musgraves and Childish Gambino are the big winners with 4 each

Cardi B claimed Best Rap Album for “Invasion of Privacy,” which made her the first female rapper ever to win that award as a solo artist. Before her the only woman who won the category was Lauryn Hill for “The Score” in 1997 when she was a member of The Fugees. Other female rappers over the years like Lil Kim, Missy Elliott and Nicki Minaj have never won that award.

Emily Lazar became the first female mastering engineer to win Best Engineered Album when she prevailed with the engineering team behind Beck‘s “Colors.” The Grammys’ diversity task force has started an initiative to address that drastic under-representation of women among the industry’s producers and engineers, so we may see more female winners like Lazar in the future.

The Grammys still have plenty of room to grow, though, as evidenced by the end of the 2019 telecast. While it had more to do with the show running long than with any explicitly sexist intent, it was still a bad look when the night’s top winners — including Dua Lipa and Musgraves — had their speeches cut off.

In fact, they cut to commercial before Lipa was done talking, and immediately after the break Portnow took the stage to discuss the Grammys’ ongoing efforts to give women more opportunities. Maybe next year start by giving women the opportunity to finish their speeches.