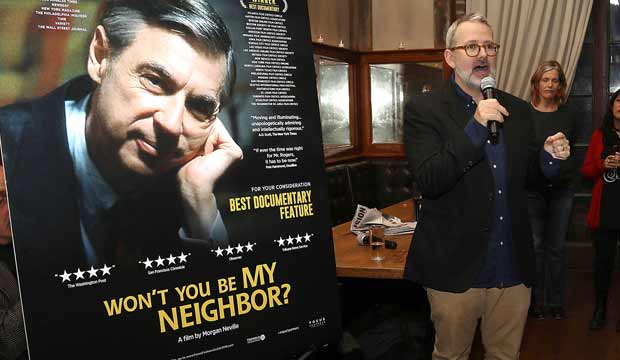 One of the biggest surprises on Oscar nominations morning was the snub of “Won’t You Be My Neighbor?” from Best Documentary Feature. But that doesn’t seem to indicate a lack of support from the industry. The film actually won Best Documentary at the Producers Guild Awards, and now we think director Morgan Neville will be avenged at the Directors Guild Awards.

“Neighbor” is a biographical film about the life and career of children’s television host Fred Rogers, placing his work in the larger context of children’s education and cultural change through the second half of the 20th century. It was a box office blockbuster by documentary standards, grossing $22 million. And it was admired by critics, scoring 85 on MetaCritic and winning top honors at the Critics’ Choice Documentary Awards.

But the academy decided to look the other way, and it’s not the first time they have snubbed a presumed favorite. Just last year another biographical doc, “Jane” about primatologist Jane Goodall, missed the cut at the Oscars even though it too had won Critics’ Choice and PGA Awards. Before that “Life Itself” (2014), which profiled late film critic Roger Ebert, was a PGA winner but an Oscar also-ran.

The Directors Guild often disagrees with the Oscars too. In the last 10 years only 5 DGA winners matched the Oscar winner, while 3 weren’t even nominated for Best Documentary at the Oscars: Ari Folman for “Waltz with Bashir” (2008), James Marsh for “Project Nim” (2011) and Matthew Heineman for “City of Ghosts” (2017).

It also has unanimous support from our Editors who cover awards year-round for Gold Derby, and from a majority of our Top 24 Users and All-Star Top 24. The top users had the highest scores predicting last year’s DGA winners, while the all-stars did the best when you combine the last two years’ predictions.

The Oscar snub would make a DGA win for “Neighbor” doubly ironic. This is actually the first nomination for Neville from the guild. The last time he was in the awards conversation it was for the doc “Twenty Feet from Stardom” (2013); it won the Oscar, but was actually snubbed by the DGA. So if he is successful at Saturday’s awards, he’ll finally have one of each.