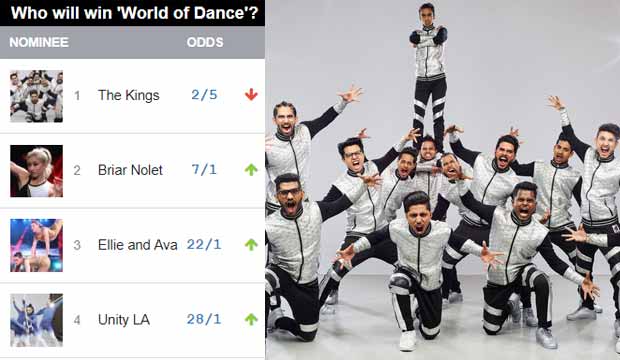 The Kings have run roughshod over the competition this season on “World of Dance,” and going into this weekend’s World Final for the million-dollar grand prize, fans who have made their predictions here in our predictions center think the coronation is about the be complete. They get leading odds of 21/50 of becoming the season three champions. Is there any chance of an upset? Maybe, just maybe.

The Kings are a dance crew from Mumbai, India, who have blended unique cultural references into their hip-hop style. They exploded out of the gate with a monster score of 97.7 during the Qualifiers. Then they won their Duel with a 99.3. They easily survived the Cut with another 97.7. And they dominated the Upper Team Divisional Final with their best score yet, 99.7. Their lowest score is higher than most other acts’ personal bests.

But not everyone’s. The Heima were eliminated during the Divisional Final, but they actually tied The Kings during the Cut with a score of 97.7. And Unity LA narrowly lost the Divisional Final with their score of 98.7, but they might still make the World Final if the judges decide to send them through as their wild card pick, which would mean there’s at least one contestant capable of matching The Kings point for point.

And perhaps The Kings will have a bad day — though by their standards a bad day would mean scoring anything lower than 98. If so, there are dancers capable of capitalizing. That includes Unity LA, but it also includes Briar Nolet, the Upper Division comeback kid who has been on the rise: 87.3 during Qualifiers, 90.3 during the Duels (she was eliminated, but won her redemption round and got to advance), 95.3 during the Cut, and another 95.3 during the Divisional Final. If she stays on this trajectory she could peak right when it counts the most and pull off a shocker.

Nolet currently ranks second in our predictions with odds of 7/1, followed by Junior Division victors Ellie and Ava with distant 22/1 odds. Do you agree that The Kings are unstoppable, or will the finale introduce us to the Kingslayer? Make or update your own predictions here before Sunday night’s show.