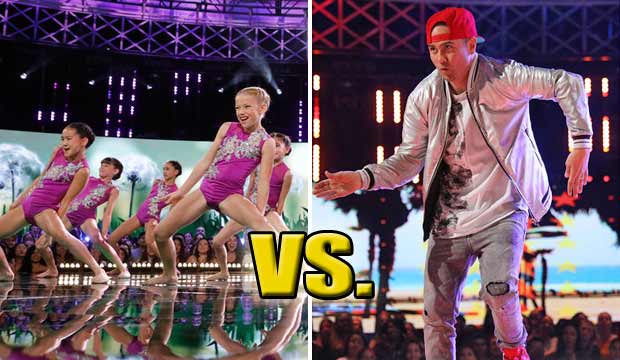 You’d think age and experience would be an advantage in an elite competition like “World of Dance,” but the kids keep showing up their elders. The winners of season two were the hip-hop junior team The Lab, and based on the results we’ve seen so far, the kids could wipe the floor with the grownups again this year.

The junior and senior dancers won’t face off until the world final at the very end of the season, when the winners in the Upper Division (age 18 and over, up to 4 members), Upper Team Division (age 18 and over, more than 4 members), Junior Division (under 18, up to 4 members) and Junior Team Division (under 18, more than 4 members) will square off for the million dollar grand prize. But that might be better news for the adults than it is for their young counterparts.

During the Upper Division Duels on March 17, the 10 contestants had an overall average of 90.0 from the judges, while the 10 Junior Team Division dancers received an average score of 91.3 during their Duels on March 24.. That may sound like a modest difference, but consider that the very best Upper Division act, the duo All Ready, scored 92.3, which was lower than four Junior Team Division acts, including one act that actually lost their Duel: JDC (96.0), Dancetown Divas (95.0), The Crazy 8’s (93.3) and VPeepz (92.7). Dancetown Divas lost their Duel against JDC, but ended up advancing to the next round after winning their redemption dance at the end of the night.

Even those redemption dances showed how much more elite the juniors were. In the Junior Team Division, the losing acts with the highest scores who competed for redemption were the Divas (95.0) and MKAM (90.7). Both of them scored higher than the two Upper Division dancers who were up for redemption: Briar Nolet (90.3) and Denise and Josh (90.0) — Nolet won that face-off.

SEE‘World of Dance’ recap: Who ruled in the Duels 2 when the junior teams went head-to-head [UPDATING LIVE BLOG]

Do you agree with the judges that the young dancers have been all-around better than the adults? Vote in our poll below to let us know.