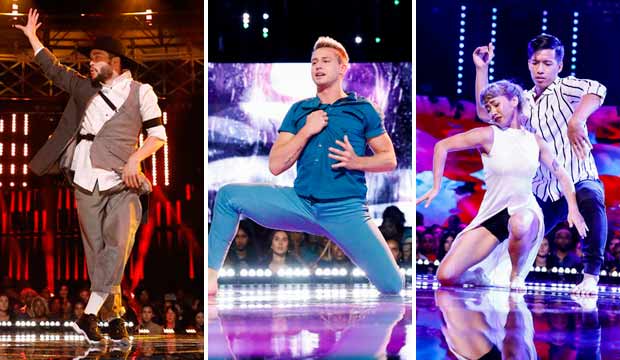 “World of Dance” judge Ne-Yo warned us when he said that there are no underdogs on this show because everyone is world class, but even then it’s hard to imagine a surprise like we saw on Sunday night in the Duels. Coming out of the Qualifiers, the top four highest scoring acts in the Upper Division (age 18 and over, up to four members) were Tobias and the EZTwins, DD Flection, Derek Piquette and Denise and Josh. But when the Duels were over all four were eliminated while the bottom six moved on to the next round. What does that mean for the next three divisions?

The scores from the Qualifiers didn’t carry over to the Duels, but the highest scoring acts from the first round had a distinct advantage: they got to pick their opponents. You’d think they would have picked opponents they could beat, and perhaps they thought they did. But one by one the front-runners went down.

Hip-hop trio Tobias and the EZTwins had the highest score coming out of the Qualifiers, and the rivals they picked were the tap-dancing D’Angelo Brothers, who had the second-lowest score in the division, but the tappers pulled off an upset.

Next, contemporary dancers Denise and Josh selected sixth ranked salsa duo Jonathan y Jorge to go up against. And again the Duel ended in an upset: the Latin dancers pulled out all the stops and prevailed.

Contemporary pair DD Flection were the second highest ranked act in the Upper Division, and they were the winners of Thailand’s version of “World of Dance.” They chose to challenge the bottom-ranked veteran Poppin John for their Duel. An easy victory, right? Nope. Poppin John wiped the floor with the international champions.

SEE‘World of Dance’ recap: The Duels begin, but with a new redemption twist [UPDATING LIVE BLOG]

Finally, Piquette took a risk by challenging the fifth ranked Derion and Madison for their Duel. That was a gamble because Derion and Madison were also a contemporary act and only scored one point lower than Piquette did during the Qualifiers, so they were evenly matched. While it wasn’t a blowout, it turned out two heads were better than one: the couple beat the soloist.

In a new “World of Dance” twist, the night ended with a Redemption Duel between the two highest-scoring losers. That gave Denise and Josh another opportunity to advance to the next round, but they lost again, this time to eighth-ranked contemporary firecracker Briar Nolet.

If the high-scorers from the other three divisions were watching the Upper Division competition unfold, they should be quaking in their boots. Just because someone got a lower score during the Qualifiers, doesn’t mean they’ll be pushovers in head-to-head combat. The underdogs aren’t going down without a fight.