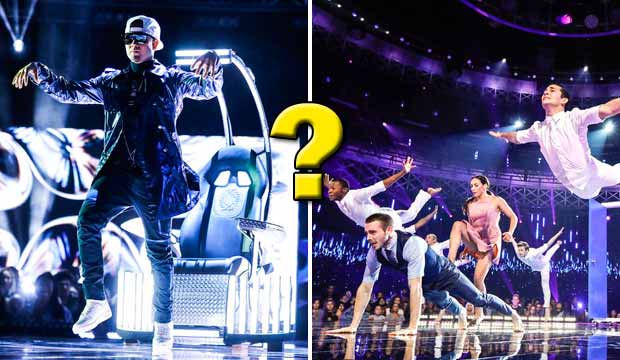 The “World of Dance” Divisional Final began with a twist, but then ended in a cliffhanger. Host Scott Evans revealed that in addition to the four division champions moving on to the World Final, the judges could choose one eliminated act to send through as a wild card pick. And at the end of the episode the judges … said they needed a minute to decide. Cut to black. So who do you think will be revealed as the lucky wild card contender? Let us know here in our predictions center, where you can also tell us who you think will win the million dollar grand prize.

As soon as the twist was announced I thought it was destined to go to an Upper Team Division act. That has been the most crowded field of the season, led by The Kings, who have run roughshod over the rest of the field. And the Divisional Final was no exception. The Kings gave a lights-out performance that scored 99.7 from the judges, securing their spot in the World Final. I’ll eat my hat if the wild card spot doesn’t go to their rivals Unity LA.

Unity LA is a contemporary troupe that features season two contestants Ashley and Zack, and the judges loved their child abandonment-themed dance so much during the Divisional Final that Ne-Yo said it was the first “World of Dance” performance ever to give him “goosies.” He and Derek Hough both gave the routine perfect 100s, while Jennifer Lopez gave it a 96, resulting in an average score of 98.7, the second highest of the night, but not enough to beat The Kings.

Unity LA didn’t just have the second best score of the night, they were also second only to The Kings for the best season-long average of the season (96.0 to The Kings’ 98.6). So whether you’re judging by Divisional Final performances or season-long performances, Unity LA would be the clear choice to send through to the next round. Do you agree they’ll be the ones to make it through? Will it be someone else? Or will the judges pick no one at all? Let us know right here.