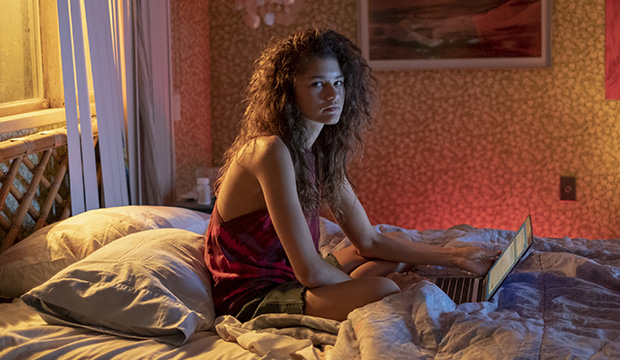 After getting her start on Disney Channel’s “Shake It Up” (2010-13) and starring in several box office hits, such as “The Greatest Showman” (2017) and “Spider-Man: Homecoming” (2017) and its 2019 sequel “Far From Home,” Zendaya has now ventured into vastly different territory headlining HBO’s gritty teen drama “Euphoria,” which could earn her a Golden Globe nomination for Best TV Drama Actress.

“Euphoria,” which aired this summer and has been renewed for a second season, follows 17-year-old Rue Bennett (Zendaya) who returns home from rehab in the pilot after a near fatal drug overdose in time to start her junior year of high school. Despite a cautiously optimistic mother, she has no intention whatsoever of staying clean. She struggles with what the future holds for her, but finds new hope thanks to her friendship/relationship with Jules (Hunter Schafer), the new girl in town. As the season dives deeper into a variety of topics, including mental illness, sexuality and teenage rage, Rue’s complex internal conflict is fleshed out.

After years of playing more put-together, modest characters, Zendaya finally gets to sink her teeth into someone who is morally ambiguous and at the verge of falling apart. It can be difficult to get behind a character, who knows the wide-ranging ramifications of her actions, continue to take drugs, but Zendaya contextualizes Rue’s behavior with her detailed narration and nuanced performance. When Rue is high, Zendaya does some of her most pivotal work on the show because her bleak portrayal of the ensuing numbing of emotional pain and complete loss of control immerses you into the mindset of a drug addict: She doesn’t take drugs to harm anyone, but to detach herself from what is nagging her on the inside.

SEE Give Zendaya an Emmy for ‘Euphoria’: ‘She’s brilliant and deserves to win,’ fans say

We don’t get to see her properly pour out her anguish until the third episode (“Made You Look”), in which she blames her drug-dealing friend Fezco (Angus Cloud) for her downfall after he refuses to give her new drugs. The crack in Zendaya’s voice at the utterance of “You did this to me” encapsulates the suffering her drug use has prompted and the horrific nature of its transition into harmful addiction. But most importantly, she creates a stark contrast to the feeling of relief Rue endures while being high, and in doing so moves away from glorifying substance abuse.

The tender, almost childlike beats that Zendaya weaves into her performance throughout, as Rue increasingly finds solace in Jules, creates a refreshing balance to the otherwise predominant feeling of gloom and doom. But it’s rather unsurprising that the ups and downs of their relationship end up playing into Rue’s depressive episodes as the season inches toward the finish line. In her grounded depiction of outright isolation and internalization, Zendaya not only creates a sense of claustrophobia that becomes one of the show’s most significant trademarks, but she turns in some of her best work on the show. She caps off the season with an impressive song-and-dance number (“All For Us”) that highlights some of the show’s strangest but best qualities.

Currently, Zendaya ranks fifth in our combined Golden Globes TV odds, trailing Olivia Colman (“The Crown”), Jennifer Aniston (“The Morning Show”), Jodie Comer (“Killing Eve”) and Nicole Kidman (“Big Little Lies”). Since the Hollywood Foreign Press Association gravitates toward the newest and shiniest objects, she seems to be in a good position to reap her inaugural nomination — perhaps even alongside “Euphoria” itself, which is in ninth place in our odds for Best Drama Series. Much of the show’s stylized nature may not have worked as well as it did had Zendaya not presented a counterbalance with a performance that was very much grounded in reality. It’s the type of revelatory breakthrough turn on a hip, cool new show that the HFPA loves, and loves to get to before any other industry awards group does.

Plus, unlike the TV academy, it has been a bit more welcoming to the teen genre of late, for instance, nominating Katherine Langford in 2018 for her turn on Netflix’s cult hit “13 Reasons Why.” “Euphoria” takes a look at adolescence through a much grittier, mature lens than your conventional teen drama, which could end up further boosting its chances.