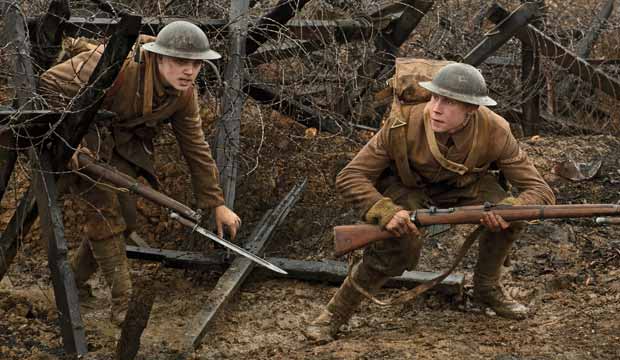 It’s been 21 years since Steven Spielberg‘s “Saving Private Ryan” (1998) won the Golden Globe for Best Film Drama, becoming the last war movie to date to take the group’s top prize. That could soon change with Sam Mendes‘s “1917,” a late-breaking WWI epic that, like Spielberg’s movie, has earned raves for its gritty realism and technical prowess.

The Universal release, which tracks the journey of two British soldiers (George MacKay and Dean-Charles Chapman) desperately trying to deliver a message to troops stationed in enemy territory, stands out for its seemingly one-take approach (courtesy of Oscar-winning cinematographer Roger Deakins). The film snagged three bids in total, including Best Director and Best Score for Thomas Newman.

It’s got a tough battle to fight for the top prize, however, as our racetrack currently has it ranked fourth with odds of 4/1. Currently, Martin Scorsese‘s “The Irishman” is perched atop in first, followed by Todd Phillips‘s “Joker” and Noah Baumbach‘s “Marriage Story.” Fernando Meirelles‘s “The Two Popes” rounds out the category in fifth.

“1917” could be helped by the Globes’ long affinity for movies about the horrors of warfare. Technically speaking, you could say that “Atonement,” their 2007 Best Film Drama victor, is a war film, since it includes a sizable chunk set during the Second World War. But it wasn’t set primarily on the battlefield like “Saving Private Ryan” or their 1986 winner “Platoon.” Additional titles such as “The English Patient” (1996), “Dances with Wolves” (1990) and “Born on the Fourth of July” (1989) have also benefited from taking place during military conflicts, which seems to tickle the Hollywood Foreign Press Association’s fancy — or at least, it used to.

As of right now, four of our Experts — Sasha Stone (Awards Daily), Anne Thompson (Indiewire), Erik Davis (Fandango) and Gold Derby’s own Tom O’Neil — are all predicting an upset by “1917.” And since the Globes shocked us last year with a victory by “Bohemian Rhapsody” (which, it should be noted, was ranked all the way in fifth place by our odds), don’t be surprised to see Mendes’s troops storm the stage on Sunday night.