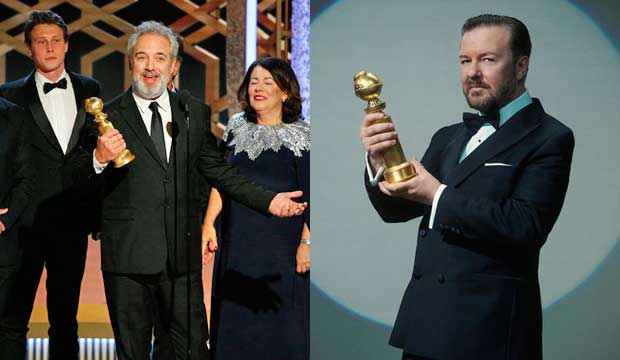 For we awards-obsessed writers and editors at Gold Derby, the Golden Globe Awards are the official launch of a winter full of trophies, surprises, snubs, red carpets, acceptance speeches, tear-inducing emotion and forgettably cringe-worthy moments. What better way to celebrate than to watch celebrities drink and mingle while fancy statues are handed out to the best in film and television by about 90 foreign journalists who make up the Hollywood Foreign Press Association?

But some moments are better than others. Below, read our collective thoughts on the highs, lows, and WTF moments of Sunday’s kudoscast. And check out the complete list of winners here.

Tom Hanks gave one of the most delightful and heartfelt speeches one could hope for. He reminded everyone why he is one of the most beloved figures in Hollywood. He is the modern day Fred Rogers – Sam Eckmann

My favorite movie of the year, “1917,” just won Best Picture (Drama) and Best Director at the Golden Globes. This never happens to me! Oscars next? – Marcus James Dixon

“1917” wins Best Film Drama and Best Director (Sam Mendes). It’s a bravura achievement, and it’s always nice when one of my favorite films actually gets the nod – Daniel Montgomery

“Succession” and “Fleabag” were the best shows on television in 2019 and were rightfully coronated tonight. Kudos to the Globes for not going with the shiny new first-season shows for once! – Kevin Jacobsen

The oh-so deserving wins for both Taron Egerton in Best Comedy/Musical Actor and Awkwafina in Best Comedy/Musical Actress; Laura Dern emerging as the easy Best Supporting Actress frontrunner, finally, after such a terrific career; and at last, both Michelle Williams and Patricia Arquette delivering important, relevant speeches with the former proving that she’s the absolute best at making speeches — comes in prepared, knows what she wants to say and delivers it in a collected, elegant manner – Luca Giliberti

Russell Crowe’s message from bushfire-ravaged Australia, including a call for action on climate change, was powerful and delivered well by Jennifer Anniston – Matt Noble

In a sea of sequels and reboots it was refreshing to see the original and distinctive “Missing Link” prevail, look out for this deserving dark horse at the Oscars – Matt Noble

“Succession” deserves every award, but I’ll take two out of three – Joyce Eng

Brian Cox winning his first Globe for “Succession” was an amazing achievement for an actor who has been working for as long as Cox has; almost six decades! I’ve been a huge fan of his ever since I saw his phenomenal performance in “L.I.E.” in 2001 and to see him get the meaty role of Logan Roy and get honored for it on top of that is what I love most about these showbiz awards – Charles Bright

The many surprising shout-outs to the devastation in Australia was much appreciated. I also really loved Michelle Williams’ speech – Rob Licuria

The Globes served a vegan dinner this year, which was an excellent message to send for a variety of reasons! You can choose your favorite – Riley Chow

Yikes, what a terrible showing for “The Irishman.” Scorsese has tried to frame his Netflix film as a representative of classic cinema amid a sea of franchises and sequels. But Sam Mendes stole that position with his double wins for “1917″ – Sam Eckmann

Nothing against Taron Egerton, but my heart breaks for Eddie Murphy, who really deserved a win for his comeback in “Dolemite is My Name” – Zach Laws

“Unbelievable” shut out. I can’t begrudge the Hollywood Foreign Press for any of their choices in the categories it lost, and there’s always bound to be a film and/or TV show that gets unlucky (just ask “The Irishman”), but this powerful series deserved at least one chance in the winner’s circle – Daniel Montgomery

The sound mixing. Get it together, guys. This ain’t your first rodeo. Same goes for people having to read off cards at certain points. Did the teleprompter break? – Kevin Jacobsen

“Unbelievable” walking home with absolutely nothing. It was one of the best shows of 2019 (my personal favorite) that should have at the very least picked up one win. Yes, I can’t begrudge any of the winners, but it saddens me that it didn’t get a much-needed boost here. Although understandable, “Big Little Lies” also walking home empty-handed was a tad bit disappointing – Luca Giliberti

I’m thrilled for Stellan Skarsgard and his eyebrows, and nothing against Russell Crowe, but Jared Harris is not going to win a televised award for “Chernobyl” and I will never get over this. Also, HFPA, you’re gonna throw your usual curveballs, but just go ahead and award the four Oscar acting frontrunners anyway? Yawn – Joyce Eng

The lack of Ricky Gervais being a consistent presence throughout the ceremony was disappointing. Come on HFPA! If you’re going to make such a big deal about him returning as host, use him throughout the whole dang show! – Charles Bright

We finally have a transcendent Asian film that really could (and deserves to) go all the way at the Oscars, but the Globes do not affirm it as a contender in the general categories. Did Quentin Tarantino need a third Globe win for Best Screenplay, especially with him picking up another trophy tonight anyway, as a Best Picture producer? – Riley Chow

Zero wins for “The Irishman”? Somebody oughta get whacked for that – Zach Laws

You could never tell if Ricky Gervais’s perpetually annoyed demeanor was an extended bit or he just really didn’t want to be there, but his bitter, cynical approach made a strong case for host-less telecasts. And many of the winners and presenters delivered political statements a lot better than he did (Sacha Baron Cohen, Michelle Williams, Patricia Arquette, even Joaquin Phoenix), so maybe without a host we could get more of those and also more clips of the nominated films and performances – Daniel Montgomery

Rough night for Netflix, only winning for Olivia Colman and Laura Dern. Hard not to take that a little personally – Kevin Jacobsen

The energy in the room was so nonexistent that even the standing ovations fell flat. Ricky Gervais proved why he should never be asked to honest again, with jokes that were just downright insensitive and others that just didn’t land. I can’t blame the room for not having it; it really did make that beginning feel palpably uncomfortable. Speaking of the beginning, it was a mess, with the sound not working properly, nominees being read aloud by the presenters for the first category, but then not anymore. Plus, people should not announce the winner just one second after they’ve gone through all their names – Luca Giliberti

Having Margot Robbie present Tarantino with his award. Her getting excited is too cute and if he had lost it would have just looked awkward. Award producers need to stop doing this – Matt Noble

Stop giving presenters categories in which their project is nominated!!!!! – Joyce Eng

Please stop wasting time announcing a clip for each nominated film! It’s filler and needs to be banned from awards shows! – Rob Licuria

Presenters of the Best Picture nominee clips tend to have at least a tenuous connection to the relevant film, its cast or crew, but many seemed entirely random this year – Riley Chow