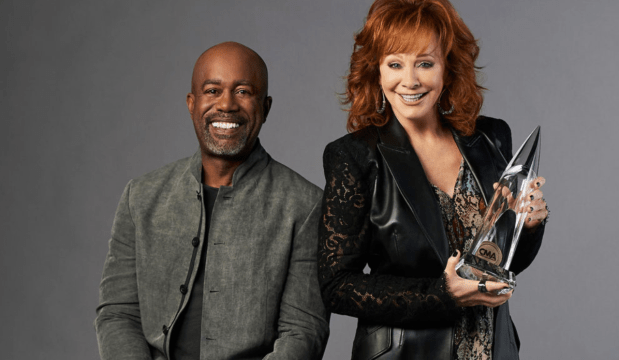 The 2020 CMA Awards will be co-hosted by Reba McEntire and Darius Rucker. This is McEntire’s second year in a row co-hosting these kudos presented by the Country Music Assn., while Rucker is a first-time emcee. The CMA awards ceremony will air live on ABC on Wednesday, Nov. 11 beginning at 8/7c.

“I’m thrilled to be back hosting the CMA Awards and even more thrilled that I get to share the stage with Darius,” says McEntire. McEntire has become a go-to host for country music award shows as of late, not only hosting the CMA Awards in 2019 but the rival Academy of Country Music Awards as well. The music superstar is nominated at this year’s CMAs for Best Musical Event of the Year for “Be a Light,” her collaboration with Thomas Rhett, Hillary Scott, Chris Tomlin and Keith Urban.

“To be invited to host this year’s awards alongside Reba — are you kidding me?! — it is an absolute honor,” adds Rucker. “Even though this year will look a little different than normal, I know that we’re all eager for a night of musical celebration, and this year’s show definitely won’t disappoint.” Rucker won the Best New Artist award at the CMAs in 2009.

This year, Jimmie Allen becomes the first African American Best New Artist nominee since Rucker 11 years ago. In a new video posted on the CMA Awards social channels, McEntire playfully asks Rucker, “Do you know what you’re getting yourself into?”

The CMAs will be held at the Music City Center in Nashville. Miranda Lambert is the nomination leader with a lucky seven bids, getting into every eligible category including Entertainer of the Year, Album of the Year and Song of the Year. Lambert is now the all-time record holder in CMA nominations for a female artist at 55, surpassing none other than McEntire herself, who has 51.