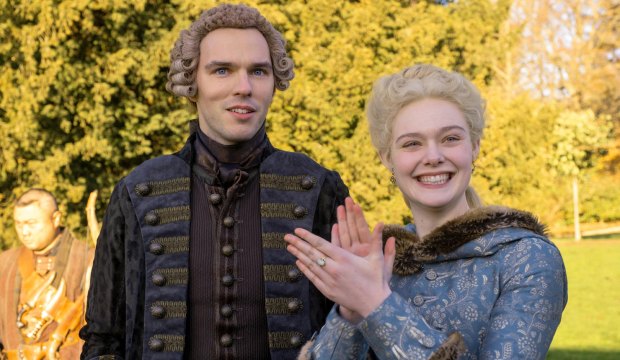 Confession time: for the most part I agree with the combined Emmy predictions of Gold Derby’s Experts, Editors and Users. No-brainer nominations for folks like Catherine O’Hara & Eugene Levy (“Schitt’s Creek”), Olivia Colman (“The Crown”) and Brian Cox (“Succession”)? Check, check and check. However, on a handful of occasions I’m going rogue and ignoring the herd mentality of your average awards pundit. Below are seven surprise performers I predict will earn Emmy nominations on Thursday, July 28 despite their lowly racetrack odds. Also see at my complete Emmy picks here.

Elle Fanning (“The Great”) — Best Comedy Actress
As Catherine the Great, the Empress of Russia, Fanning gives a genre-bending performance that straddles the line between comedy and drama. Emmy voters are suckers for these types of characters — just look at recent category winners Phoebe Waller-Bridge (“Fleabag”) and Rachel Brosnahan (“The Marvelous Mrs. Maisel”). In Hulu’s “occasional” true story, Fanning gets to show off her range in the many scenes in which her character acts defiantly and breaks the rules, particularly when it comes to overthrowing her husband, Emperor Peter (the equally deserving Nicholas Hoult).

Larry David (“Saturday Night Live”) — Best Comedy Guest Actor
Sure, David is a shoo-in for another nomination (his seventh) as lead actor of “Curb Your Enthusiasm.” But he shockingly doesn’t break into our predictions for his recurring guest role as Bernie Sanders on “SNL.” David popped up in six episodes throughout the 45th season, mostly in cold opens that skewered the Democratic Debates. However, he really went viral when the show was forced to film “at home” episodes and he Zoomed in to address Sanders dropping out of the Presidential race. David has yet to win for this iconic impersonation, and that’s pretty, pretty, pretty bad.

Josh O’Connor (“The Crown”) — Best Drama Supporting Actor
One of the breakout stars of the newly invigorated “middle years” season of Netflix’s regal drama, O’Connor takes on the role of Prince Charles, eldest child of Queen Elizabeth (Olivia Colman) and Prince Philip (Tobias Menzies). The 30-year-old actor only appeared in 4 out of 10 episodes, so he was eligible to compete as a guest star, per the Emmy rules. However, O’Connor opted instead to enter the supporting category, a smart move as his character is integral to the overall story. Will the Emmy strategy pay off on nominations morning?

Julie Dretzin (“The Handmaid’s Tale”) — Best Drama Guest Actress
“Praise be” to great guest stars! Amazingly, “The Handmaid’s Tale” has gone three-for-three at the Emmys in Best Drama Guest Actress, winning for Alexis Bledel (2017), Samira Wiley (2018) and Cherry Jones (2019). Dretzin could follow that same trajectory for her compassionate role as Eleanor Lawrence, the unstable wife of Joseph (Bradley Whitford). The recognizable character actress has yet to be nominated for a major industry award, despite regularly working in Hollywood for several decades. It’s time.

Kerry Washington (“Little Fires Everywhere”) — Best Movie/Limited Actress
Alas, due to new Emmy rules, there will only be five nominees in this lead category this year. That means Washington, who comes in sixth place in our rankings for Hulu’s limited series, is all of a sudden on the bubble for a nomination. She certainly deserves recognition for her emotional performance as Mia Warren, a struggling single mother who comes to Shaker Heights to try to escape her past. Washington’s co-star Reese Witherspoon is predicted to receive a bid, but it’d be strange to nominate just one and not both.

Patti LuPone (“Hollywood”) — Best Movie/Limited Supporting Actress
With two Grammys and two Tonys already on her mantel, LuPone probably doesn’t care about winning more awards, but that doesn’t mean she doesn’t deserve more. In Ryan Murphy‘s “Hollywood,” the legendary actress stands out in an impressive ensemble as Avis Amberg, a woman who unexpectedly becomes the president of a movie studio. LuPone dominates every scene she’s in, particularly when she must decide whether to greenlight a movie starring a young Black actress.