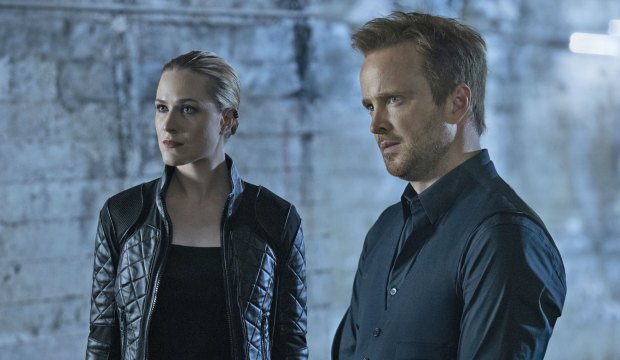 Aaron Paul won three Supporting Drama Actor Emmys for his star making turn in “Breaking Bad.” So why are most Gold Derby users sleeping on this Emmy favorite’s chances in the Best Drama Actor category for his role as Caleb in Season 3 of “Westworld?”

As of this writing, Paul shockingly sits in 13th place in Gold Derby’s 2020 Emmy odds for Drama Actor. Even more distressing is that he has support from just one expert. None of the editors are predicting his nomination. But these prognosticators should rethink their Emmy rankings.

Pundits were certain that “Westworld” would fall off the Emmy map in 2018 for Season 2, admittedly it’s most complicated season thanks to multiple diverging timelines in the narrative. Emmy voters didn’t care about the complex story, however. They loved piecing together the mysteries of HBO’s sci-fi drama and lauded it with a whopping 22 nominations. That was good enough to tie it with “Saturday Night Live” for the most nominations of the ceremony.

SEE It was MIA last year, but don’t count out ‘Westworld’ in Best Drama Series at the Emmys

Voters have also thrown major support behind the large ensemble cast of the series. “Westworld” scored four acting nominations for Season 1 and increased that tally to five for Season 2. Most revealing for Paul’s chances is that the show has had a nominee for Drama Actor every season. Anthony Hopkins landed a bid in 2017, then Jeffrey Wright and Ed Harris both competed in the category in 2018. With Hopkins’ character dead and both Wright and Harris moving to the Supporting Actor race this year, Paul faces no internal competition for Lead Actor.

If “Westworld” could wrangle 22 nominations for what has been touted as its most confusing season, the newest iteration should do just fine. Season 3 made efforts to streamline the story in order to make it easier to follow, excising the confounding multiple timelines. Well…mostly. And let’s not forget that this season was a major watercooler event that got people talking and bouncing theories around while we were all cooped up during the global pandemic. It’s reasonable to assume that the shows which brought us together during this global crisis will be remembered and rewarded at the Emmys.

Voters will certainly have the actor on their minds thanks to his other high profile projects. He revived his “Breaking Bad” character Jesse Pinkman for the film “El Camino.” That film sits atop Gold Derby’s combined odds for TV Movie, while Paul lands in a comfy fourth place in Movie/Limited Actor. And let’s not forget that her serves as an executive producer for “BoJack Horseman.” That comedy landed him an Emmy nomination for Animated Program last year, and will return to the competition for it’s final season. Paul could have a very good turnout at the awards ceremony thanks to these endeavors.

It is also worth highlighting that in “Westworld,” Paul is the beating heart of humanity within a futuristic tale of sentient androids and big brother AI. The actor gets to show off impressive range (particularly in the episode “Genre,” where Caleb is injected with a drug that sends his mind bouncing through various movie genres) and he has immediate, compelling chemistry with series favorite Evan Rachel Wood. But more important than all that: you root for Caleb. The overarching narrative of the season hinges on Caleb’s decision to take up the mantle of revolutionary leader. The penultimate episode, “Passed Pawn,” is dedicated to fleshing out Caleb’s backstory with a tragic tale which humanizes the character. Paul delves into a deep well of emotion to play it brilliantly. Caleb is leading humanity through an uncertain future, and the performance can easily lead Paul into the Emmy race.