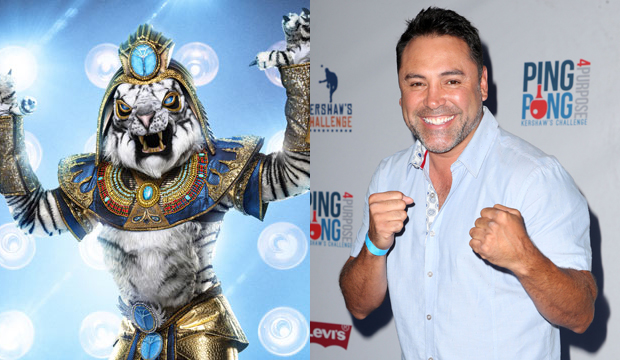 With the 2020 Oscars airing Sunday night on ABC (see Gold Derby’s official predictions), I clearly have the word “Oscar” on the brain. It’s no doubt why I’m seeing Oscars everywhere, including on Fox’s reality TV juggernaut “The Masked Singer.” During the second episode the White Tiger’s vocal clue immediately piqued my interest: “I was voted most likely to go to the mat for a friend, and I did literally.” Hmm, that sounds like a boxer to me. And one of the most famous boxers is none other than Oscar De La Hoya.

What do the clues say? Apparently the White Tiger has a giant career filled with accomplishments, but is a scaredy-cat (get it?) when it comes to singing on stage. Viewers saw a clam shucking trophy and a poster of Abraham Lincoln‘s “four score and seven years” quote as the large feline walked down a school hallway. Other clues included skiing on the slopes and celebrating at a block party. Finally, he admitted that dancing heals his body after taking a beating.

None of the panelists have officially guessed Oscar De La Hoya yet, but then again, they also didn’t correctly name Lil Wayne as the Robot in the season premiere or Drew Carey as the Llama in the playoffs episode. Instead, the judges believe White Tiger’s true identity to be one of these famous faces: wrestler/actor John Cena, wrestler/reality star Hulk Hogan, “Aquaman” actor Jason Mamoa, or football player Charles Haley and Rob Gronkowski.

It seems obvious the White Tiger is an athlete, especially after that final comment. Boxers are notorious for getting beat up on mats, which fits that vocal clue to a tee. Conversely, there aren’t any mats on the football field, which seems to point away from people like the Gronk … unless it’s just a red herring.

Oscar de la Hoya, aka the “Golden Boy of Boxing,” fought in the ring from 1992 to 2008, winning several world titles before retiring. We don’t know if he can sing, but that’s clearly not a prerequisite to star on “The Masked Singer” as several past contestants weren’t known for their vocal chops. He’s no stranger to reality TV either, having appeared in “Masterchef” (2019), “Celebrity Family Feud” (2017) and “The Contender” (2007)