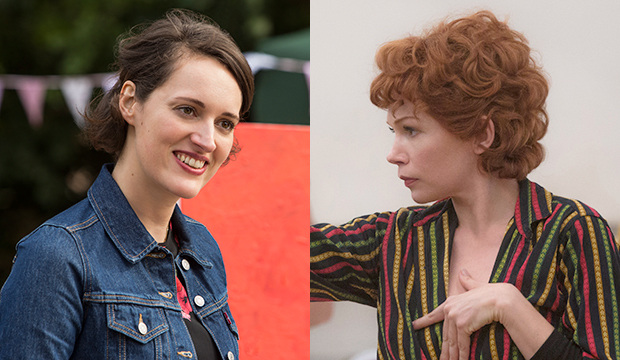 Break out the brooms because Phoebe Waller-Bridge and Michelle Williams just completed a very tough sweep. With their Screen Actors Guild Awards wins Sunday for “Fleabag” and “Fosse/Verdon,” respectively, the actresses are now the second and third people to have won all five major TV acting awards in a single season.

The first to do so was Sarah Paulson, who claimed the Television Critics Association, Emmy, Golden Globe, Critics’ Choice and SAG Awards in 2016-17 for her turn as Marcia Clark on “The People v. O.J. Simpson: American Crime Story.” Like Paulson, Waller-Bridge and Williams also started their runs at the TCA Awards in August, where they were honored with their respective Individual Achievement in Comedy and Drama prizes — both gender-neutral categories.

Other people have completed this TV grand slam for a single performance, but they were over the course of multiple years. They include Bryan Cranston (“Breaking Bad”), Claire Danes (“Homeland”), Tina Fey (“30 Rock”) and Julianna Margulies (“The Good Wife”). In Fey’s case, she earned four of the awards for the second season of “30 Rock,” but Critics’ Choice didn’t start honoring television until 2011, after the fifth season of “30 Rock”; she won the inaugural award.

Since “O.J.” and “Fosse/Verdon” were limited series, Waller-Bridge is the first person to pull off this single-season sweep for a regular series; however, since the first season of “Fleabag” did not register stateside awards-wise and the beloved second season was its last, this, like “O.J.” and “Fosse/Verdon” was the only chance voters had of recognizing Waller-Bridge.