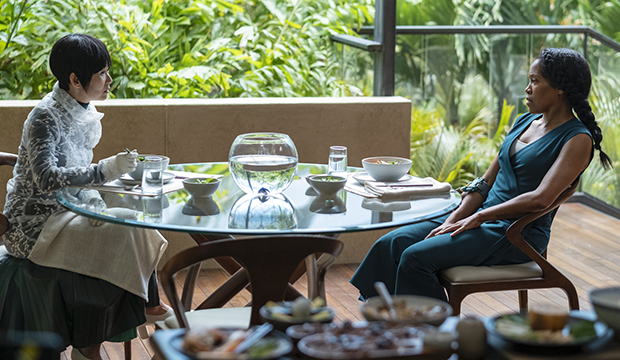 Bust out the brooms because “Watchmen” made it a clean sweep at the Television Critics Association Awards, winning all four of the categories for which it was nominated on Monday, including Program of the Year.

The seminal HBO series also bagged Outstanding Achievement in Movie, Miniseries or Specials, Outstanding New Program and Individual Achievement in Drama for Regina King. “Watchmen” bested “Better Call Saul,” “Mrs. America,” “Schitt’s Creek,” “Succession” and “Unbelievable” for the top program honor. This is the third year in a row that one show has won at least three awards after “The Americans” in 2018 and “Fleabag” last year.

Because the TCA summer press tour, during which the TCA Awards ceremony takes place, was canceled due to COVID-19, the winners sent in acceptance speeches (which won’t be released publicly).

In his speech, “Watchmen” creator and executive producer Damon Lindelof shared that his favorite parts of the TCA press tour is coming out on stage for his panels to complete silence as journalists are not supposed to applaud. “It is one of my favorite parts because your invalidation actually validates my belief that I am human garbage,” he deadpanned. “So imagine my dismay upon learning that you have awarded ‘Watchmen’ so generously. I suppose one of the only upsides of this global pandemic is that this format continues to deprive me of the applause I so unhealthily crave.”

Getting serious, Lindelof thanked the “immensely talented group of artists who weren’t afraid to tell me when I was doing it wrong, and the only way to do it right was to move into the backseat and let someone else drive for a while,” HBO and Warner Bros., the other nominees, and the critics for “both withholding your applause and bestowing us with this great honor.”

King is the first Black champ in her category and second overall since Andre Braugher claimed the category’s first two awards in 1997 and ’98 for “Homicide: Life on the Street.” She’s also the fifth consecutive woman to win the award, following Sarah Paulson (“The People v. O.J. Simpson: American Crime Story”), Carrie Coon (“Fargo” and “The Leftovers”), Keri Russell (“The Americans”) and Michelle Williams (“Fosse/Verdon”). Paulson and Williams went on to win Emmys, while Russell and Coon (for “Fargo”) were nominated.

While these results will have no bearing on the Emmys since voting has already closed, it could foreshadow a big night for “Watchmen” on Sunday. It leads the way with 26 nominations and is the favorite to take home Best Limited Series and Best Limited Series/TV Movie Actress for King.

“Thank you for this award, which at time of recording we have not yet won, and due to data transmission and limits, I am responding to quite weirdly,” “Succession” creator and executive producer Jesse Armstrong said in his heavily stitched-together speech from various parts of his home.

“I am truly humbled and most appreciative,” Trebek said. “Thank you so very much.”

Outstanding Achievement in News and Information: “The Last Dance”

Program of the Year: “Watchmen” 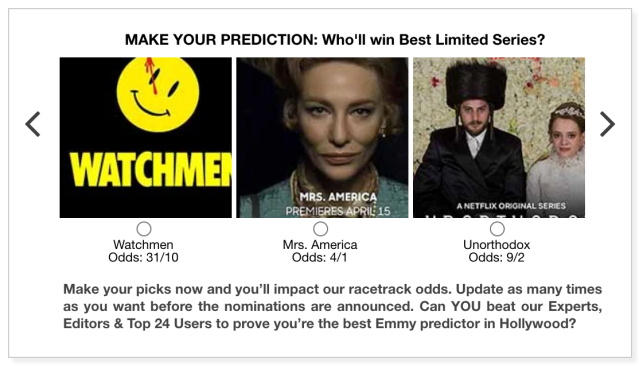