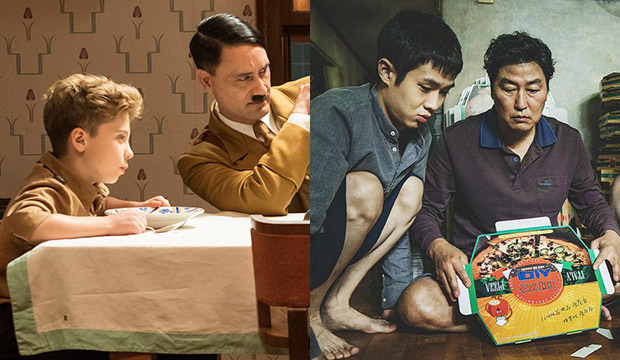 The 72nd Writers Guild of America Awards took place Saturday in simultaneous non-televised ceremonies held in Los Angeles and New York (so cruel to have two and not air either of them, amirite?). It was one of the final guild kudos of this truncated Oscar season — the Art Directors Guild Awards were held the same night — and may give us some clarity on the screenplay races, which are two of the tighter ones in what could be a very predictable Oscar night.

The caveat, of course, is that the WGA Awards are not a faultless bellwether for Oscar glory. Its stringent rules prohibit non-guild members from competing, which means we have ineligible Oscar contenders every season. The biggest one this year is “Once Upon a Time in Hollywood,” written by Quentin Tarantino — who’s never been a guild member — which is AWOL from the WGA’s original category. The script has already won the Golden Globe in the Hollywood Foreign Press Association’s combined original and adapted category, and is the favorite at BAFTA and the Oscars.

In adapted, the WGA went with “A Beautiful Day in the Neighborhood” (Micah Fitzerman-Blue & Noah Harpster), “The Irishman” (Steven Zaillian), “Jojo Rabbit” (Taika Waititi), “Joker” (Todd Phillips & Scott Silver) and “Little Women” (Greta Gerwig). “A Beautiful Day in the Neighborhood” was snubbed by the Oscars in favor of Anthony McCarten‘s “The Two Popes,” which was deemed an original screenplay by WGA but wasn’t nominated.

Our odds pegged “Parasite” and “Little Women” to prevail.

On the TV side, the drama series nominees are “The Crown,” “The Handmaid’s Tale,” “Mindhunter,” “Succession” and “Watchmen.” The comedy slate consists of “Barry,” “The Marvelous Mrs. Maisel,” “PEN15,” “Russian Doll” and “Veep.” Conspicuously absent is Emmy champ “Fleabag” because Phoebe Waller-Bridge is not a guild member. The WGA Awards also honors new series, individual drama and comedy episodes, among others.

Below, check out our minute-by-minute report on this year’s WGA winners. (All times ET.)

8:00 p.m.: The bicoastal show is starting at a humane time for East Coasters and all the BAFTA nominees who need to hop on a flight to London. Film winners will be announced early to accommodate travel plans. We can never do this shortened season again. Thanks.

8:12 p.m.: Best Adapted Screenplay goes to Taika Waititi for “Jojo Rabbit.” “Jojo’s” been low-key killing it with the guilds, taking the ACE Eddie for comedy and costume design as well, along with a minor MPSE win. Waititi’s in good position to snag BAFTA on Sunday (he leads our odds), which is a potent combo. Greta Gerwig (“Little Women”) took the USC Scripter, but it needed this win to maintain its edge. “Jojo” is the stronger film overall, so if Waititi takes BAFTA, the Oscar is probably his. Gerwig’s loss also means we won’t have a solo female champ in this WGA category for now 25 years running; the last was Emma Thompson for “Sense and Sensibility” (1995). “Jojo” also has more guild triumphs than “Once Upon a Time in Hollywood” now, so you could argue it’s in third for Best Picture.

8:17 p.m.: And Best Original Screenplay goes to Bong Joon Ho and Han Jin Won for “Parasite.” It’s the first foreign language film to win this category (not majorly notable since many writers of foreign language films are not guild members). Even though “Once Upon a Time in Hollywood” was ineligible here, this sets up “Parasite” nicely for the Oscars as a key category to win to take Best Picture. “Parasite” now has three big guild victory: WGA, ACE (drama) and SAG ensemble (it also won MPSE for a foreign language film). It still has the Art Directors Guild Awards to go tonight. Last year, neither of the WGA champs went on to win the Oscar: original winner “Eighth Grade” wasn’t nominated at the Oscars, and adapted honoree “Can You Ever Forgive Me?” lost to “BlacKkKlansman,” which won BAFTA and was a Best Picture nominee. And oh yeah, had the overdue Spike Lee factor.

8:36 p.m.: Best Episodic Drama goes to “Tern Haven” from “Succession,” written by Will Tracy. This was the introduction of Cherry Jones‘ Nan and in which we learned of a renowned novel called “The Electric Circus.” Would read.

8:49 p.m.: “Are You Smarter Than a 5th Grader?” takes Best Quiz and Audience Participation.

9:10 p.m.: Alex Gibney nabs his fourth WGA for Best Documentary Screenplay for “The Inventor: Out for Blood in Silicon Valley.” He’s the only person with multiple wins in the category.

9:24 p.m.: Liz Feldman wins Best Episodic Comedy for the “Dead to Me” pilot. OK, so now how do we ensure Linda Cardellini gets some recognition next?

9:41 p.m.: Some variety champs: “I Think You Should Leave with Tim Robinson” takes Best Comedy/Variety Sketch Series and “Full Frontal with Samantha Bee Presents: Not the White House Correspondents’ Dinner Part 2” scores Best Comedy/Variety Special. “Saturday Night Live” was the odds-on favorite in the former, but this is only a minor upset since “SNL” didn’t even win last year, losing to “Nathan for You.”

10:03 p.m.: It’s No. 13 for “The Simpsons”: “Thanksgiving of Horror,” written by Dan Vebber, wins Best Animation. “The Simpsons” is the only show that has won more than two awards in this category. Will anyone ever catch it? Probably not.

10:09 p.m.: Someone play “L to the OG.” “Succession” goes 2/2, garnering Best Drama Series. We still have months to go, but we can at the very least pencil “Succession” in for a second straight drama writing Emmy. The show has now won three of the four top guilds (WGA, DGA, PGA), with only SAG missing. Because it’s never been nominated there.

10:19 p.m.: And the final award of the night goes to “Last Week Tonight with John Oliver” for Best Comedy/Variety Talk Series. It’s its fifth win in the category as it inches closer to “Late Night with Conan O’Brien’s” record of six. See, isn’t it nice when these things wrap up early? Although it’s kind of anticlimactic to end with this category (no offense to John Oliver), but as aforementioned, the film categories, normally last, had to go first. Waititi and Bong are probably clinking champagne glasses on their red eye as we speak… or just chillaxing with handheld mini fans. Bongtiti is the bromance we never knew we needed.