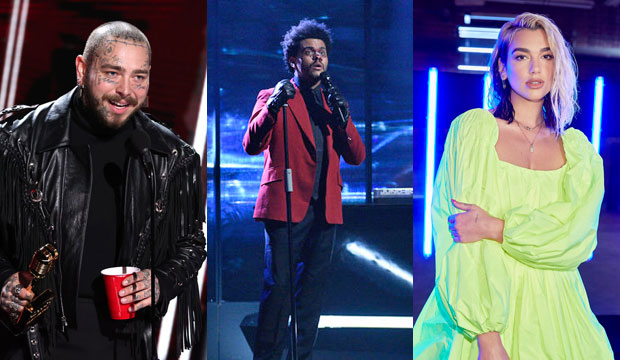 As we get closer to the 2021 Grammy Awards nominations (date yet to be announced), we should take a closer look at the race for Record of the Year, which is stacked with possibilities. This category honors individual songs, with the prize going to the artists, producers and engineers. Let’s see which hits are primed for some glory.

As with Album of the Year, the Record of the Year conversation seems to be set on The Weeknd for his smash hit “Blinding Lights.” The song would not only be The Weeknd’s first general field win, it would also give superstar producer Max Martin his first general win too after working on some of the biggest hits of the last 25 years. The song dominated the Billboard Hot 100 and was acclaimed upon release. However, it does have some heavy competition for the top honor.

Post Malone might score his first ever Grammy win with the record-breaking single “Circles,” which spent a whopping 39 weeks in the Billboard Hot 100’s top 10, the most for any song ever. “Circles” might also be the best way to finally give Malone a win after consecutive nominations in this category for “Rockstar” (2019) and “Sunflower” (2020). And “Circles” may be more accessible to the voting membership than Malone’s previous hits, and could attract votes from academy members from multiple genres.

Another big contender is Dua Lipa with her smash “Don’t Start Now.” The track spent multiple weeks in the top five, and has a very retro-disco sound that voters might love (like Daft Punk‘s win in this category for their disco-funk hit “Get Lucky” in 2014), especially given that Record of the Year honors producers as well as performers. However, “Don’t Start Now” wasn’t quite as big as the aforementioned two songs, never reaching number-one, which might dampen its chances a bit.

One new artist carries two big hits that could be nominated. The first is Roddy Ricch, who’s in contention for his number-one hits “Rockstar” (with DaBaby) and “The Box.” Ricch is in an interesting position: he could very well become the second artist to get two ROTY nominations in the same year, after Pharrell Williams in 2014 (featured on both “Get Lucky” and Robin Thicke‘s “Blurred Lines”). However, voters might choose “Rockstar” to honor both him and DaBaby while making space for other artists. The real question is whether the nomination review committee will choose one of them, both, or if these two smashes could perhaps cancel each other out.

Other big hits in the running for a win include Doja Cat’s “Say So,” Harry Styles’s “Adore You,” Billie Eilish’s “Everything I Wanted,” BTS’ “Dynamite,” Tones and I’s “Dance Monkey,” Maren Morris’s “The Bones”, and Lady Gaga and Ariana Grande’s “Rain On Me.”

Politically charged songs might also get a spot or two this year for Record of the Year. Past nominee H.E.R. may return to the race with her jaw-dropping song “I Can’t Breathe,” which addresses police brutality following the murder of George Floyd by police this year. H.E.R. got surprise general noms last year with “Hard Place” in both Record and Song of the Year, as well as two surprise Album of the Year nominations in a row for her compilations “H.E.R.” (2019) and “I Used to Know Her” (2020). So we already know the academy is inclined to nominate her.

Another big contender this year is Lil Baby, whose Black Lives Matter-supporting hit “The Bigger Picture” is a strong bet for a Song of the Year nomination. Another rap single that could surprise is “Walking in the Snow” by Run the Jewels, which references police brutality in explicit detail; these two songs are helped by the academy’s frequent admiration for political rap songs in general. Typically they only show up in Song of the Year (like Kendrick Lamar‘s “Alright” and Macklemore and Ryan Lewis‘s “Same Love”), but we might see them break through in both (like Childish Gambino‘s “This is America,” which won both awards).

While this category tends to skew commercial, a couple of minor hits and under-the-radar songs tend to break through every year on the strength of their acclaim. Some that could surprise on nominations day include The Killers’ “Caution,” Fiona Apple’s “Shameika,” Brittany Howard’s “Stay High,” Tame Impala’s “Lost In Yesterday” and The Chicks’ “Gaslighter.”